10 Things to Do in Drumheller & Local Tips for Visiting

The small town of Drumheller, lying in the Red River Valley, has a unique charm. Step into a western movie, hike in the canyons, discover the dinosaurs and explore awesome and quirky things to do in Drumheller and its remarkable landscape.

When we first heard about Drumheller, we weren’t quite sure what we can find. With Drumheller being called so many names:

„Dinosaur capital of the world. “

We were keen to see what else Alberta has to offer besides the stunning Canadian Rockies. We weren’t disappointed. Quite the opposite.

In this post, you’ll find everything you need to know about Drumheller, including recommended places to stay, eat and plenty of things to do in Drumheller for a fantastic day trip or a weekend getaway.

We’ve visited Alberta badlands twice now and are glad we learnt more about the history of the province we call home.

Travel back in time and explore Drumheller, we hope you will enjoy it as much as we did. What exactly are ‚badlands‘?

You will hear Drumheller referred to as „Badlands of Alberta“. So what exactly are badlands? Badlands is basically a dry terrain with sedimentary rocks which eroded due to either wind or melting glacial water.

Other examples of badlands are Badlands National Park in South Dakota, Henry Mountains in Utah, Putangiura Pinnacles in New Zealand, Calanchi in Italy or Valle de la Luna in Argentina. 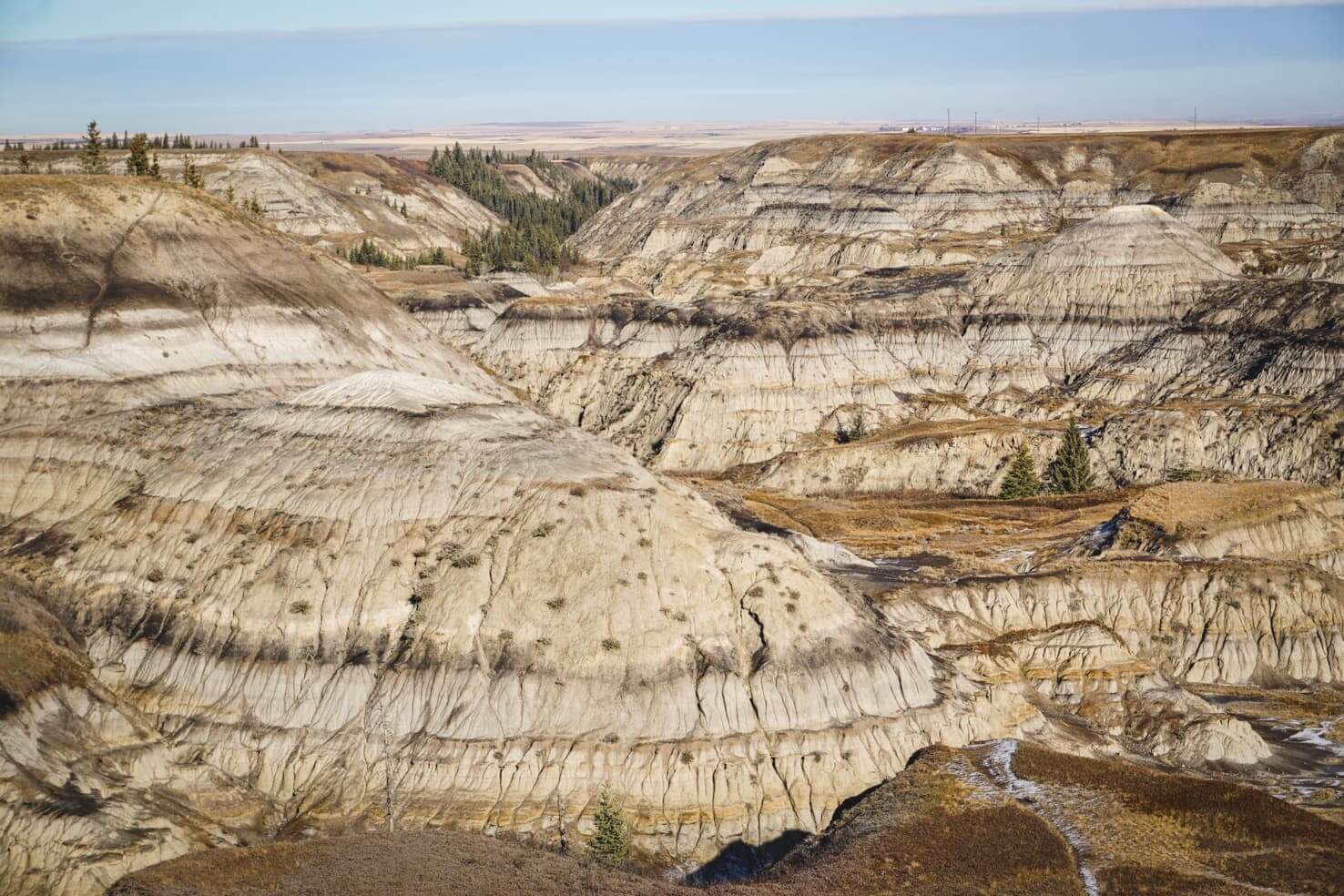 Where is Drumheller & how to get there

Drumheller is located 110 km northeast of Calgary in the Red Deer River valley in the Canadian province of Alberta.

When driving from Calgary, as you exit the city, the road and surrounding fields will become the only scenery. Nothing else after the next turn, there are barely any turns at all. You just go straight as if you were following the bullet fired from a cowboy‘s pistol.

As you start to approach Drumheller (from highway #9), the road dips down to a Red River Valley, and a vast canyon will appear in front of you. From now on, you will feel like in a western movie set.

TIP
If you need a car for a trip to Drumheller, use Rentalcars to compare different car rental companies to find the best deal.

Drumheller used to be an important coal-mining town and a railway station. Now the railway station is closed and you can see hints of its coal mining history wherever you go.

Currently, the paleontology (dinosaur bones) and tourism are the main business in Drumheller.

The town’s population is only 8,000 and attracts several thousand tourists every year.

From a tourist point of view, the town is very easily navigable with signs to major attractions on almost every corner. If you need any additional information, you can always visit the Drumheller Visitor Information Centre located directly under the World’s Largest Dinosaur (which is visible from almost anywhere). 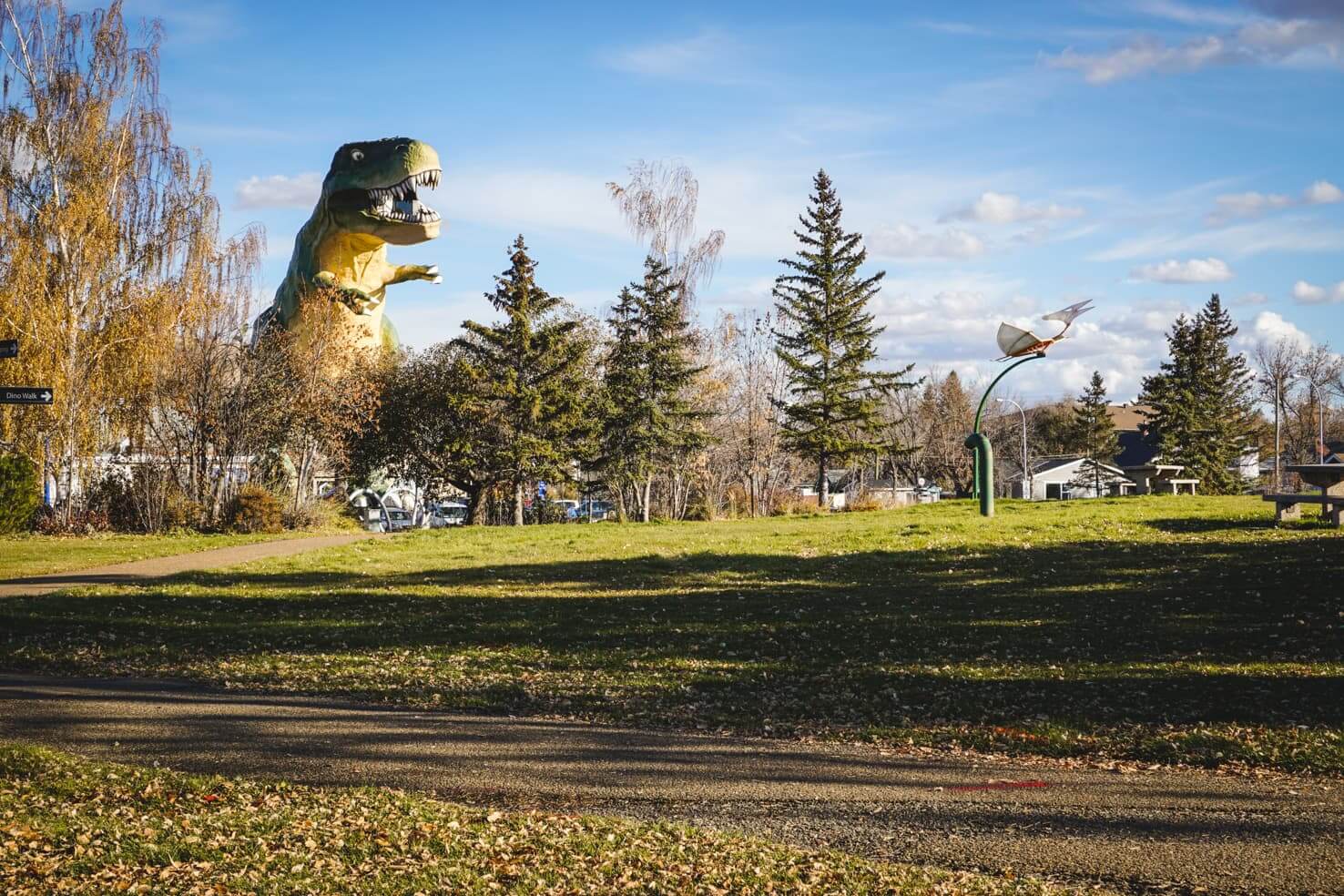 Streets of Drumheller are filled with dinosaurs. Even though Drumheller’s centre tiny, you can find many cartoon dino statues on every corner, which makes for a fun walk while going for lunch. If you are lucky, you can still find real dinosaur fossils in the area. 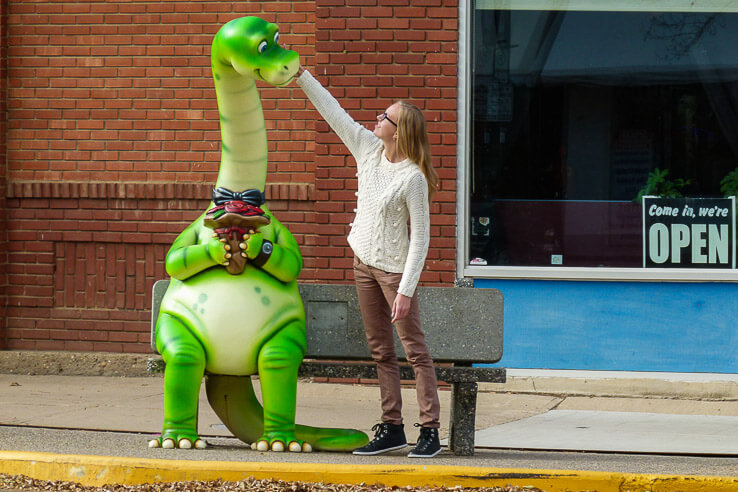 Where to stay in Drumheller

For such a small town, Drumheller offers its visitors a lot of accommodation options for all budgets.

If you rent a Smile Campervan from us, you can stay for free at Walmart’s parking lot. It’s not a luxurious stay but perfect for one night when all you need is a toilet and some groceries. If needed, you can shower for 2 CAD in the Recreation Centre. 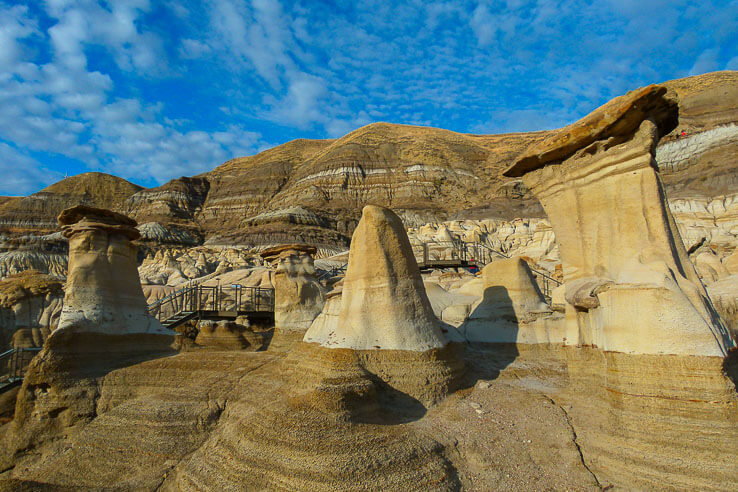 10 awesome things to do in Drumheller

If you’re visiting from Calgary for a day, I suggest the first 5 activities below; they offer the best of Drumheller. If you’re coming for a weekend, you can easily fit all ten into your Drumheller itinerary.

Hands down the biggest attraction in Drumheller.

The Royal Tyrrell Museum features hundreds of fossils, dinosaur skeletons, interactive terminals throughout to learn about the earth’s history, and even a tropical garden. 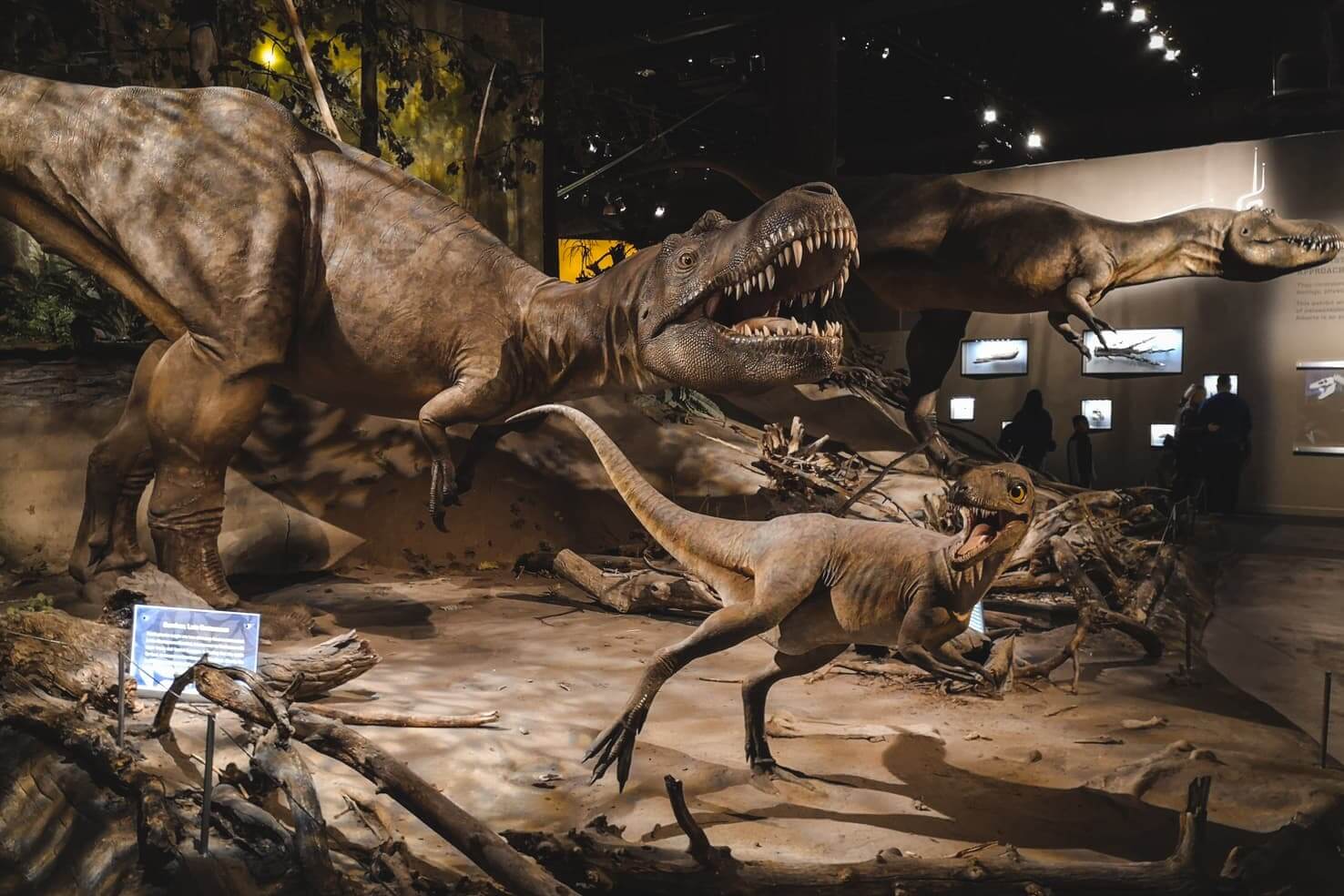 Located only 6 km north of Drumheller in Midland Provincial Park, with a short walking trail through the canyon right next to the building, the museum will leave you speechless. Take it from someone who isn’t even a big fan of museums.

Plan to spend here at least 3 hours, and even more if you’re planning to visit with kids. The museum is open year-round, admission for an adult is 21 CAD. 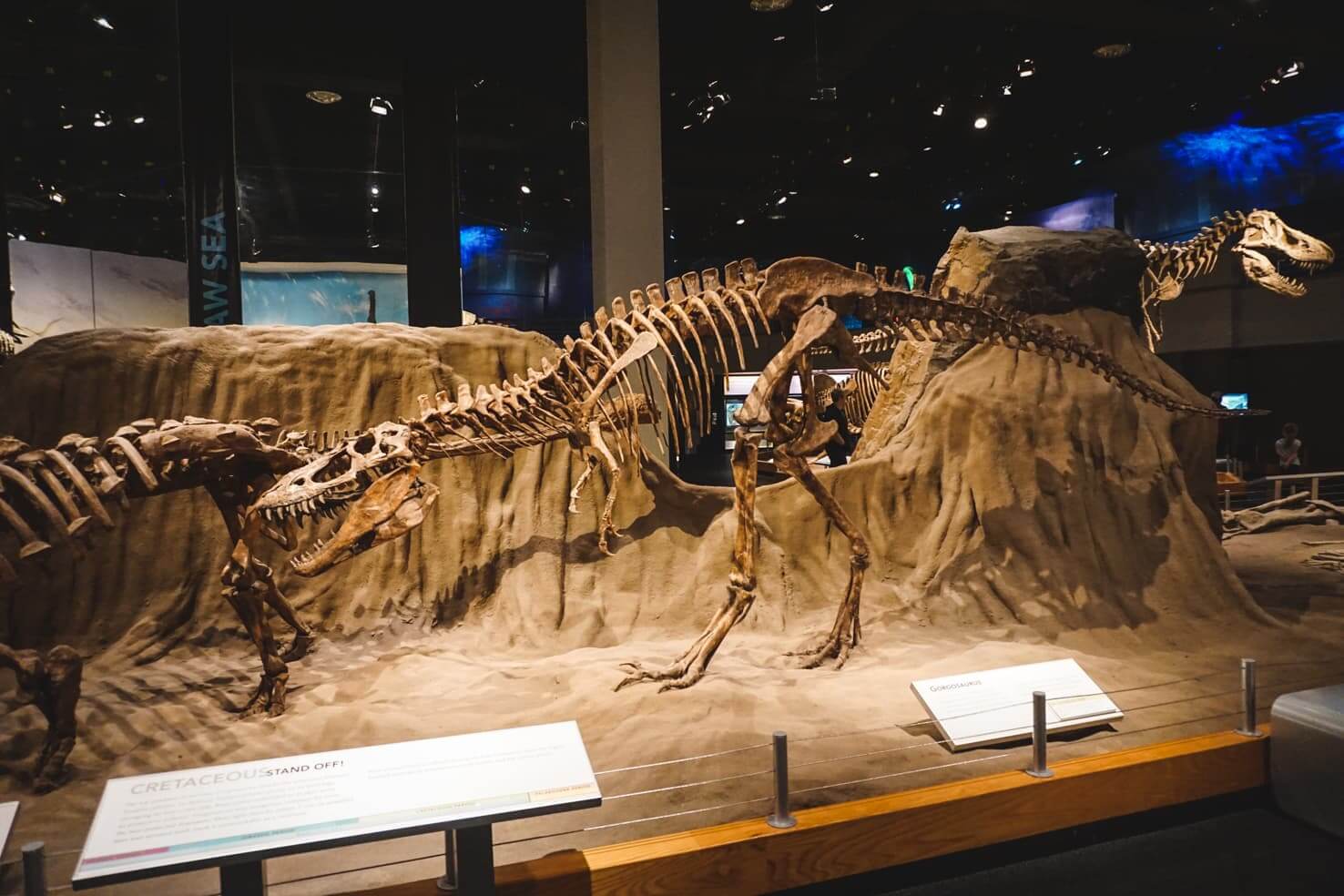 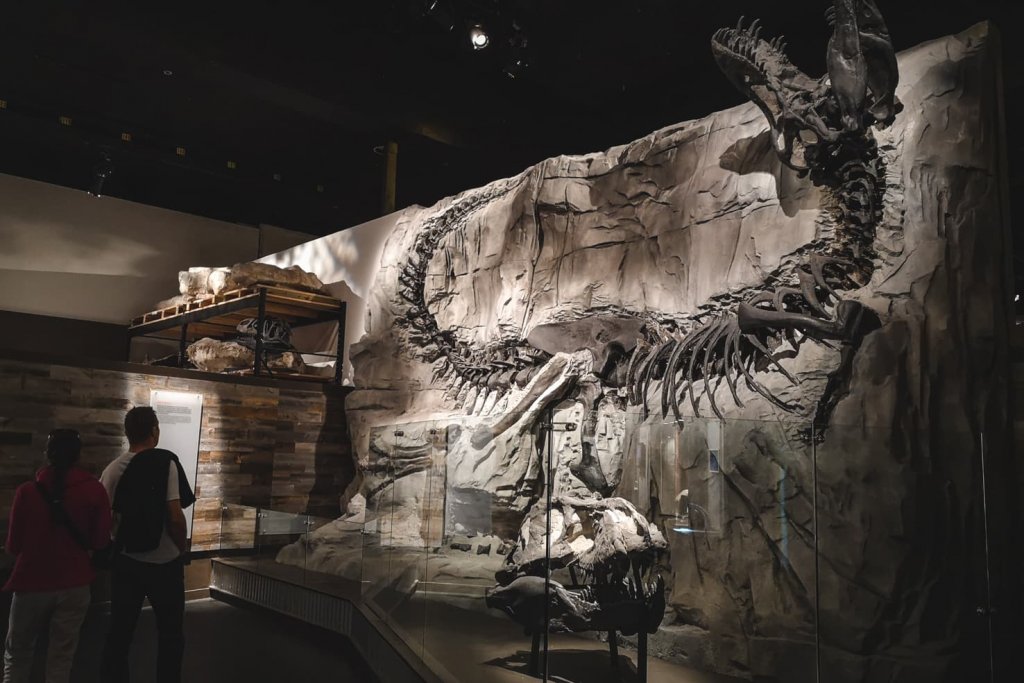 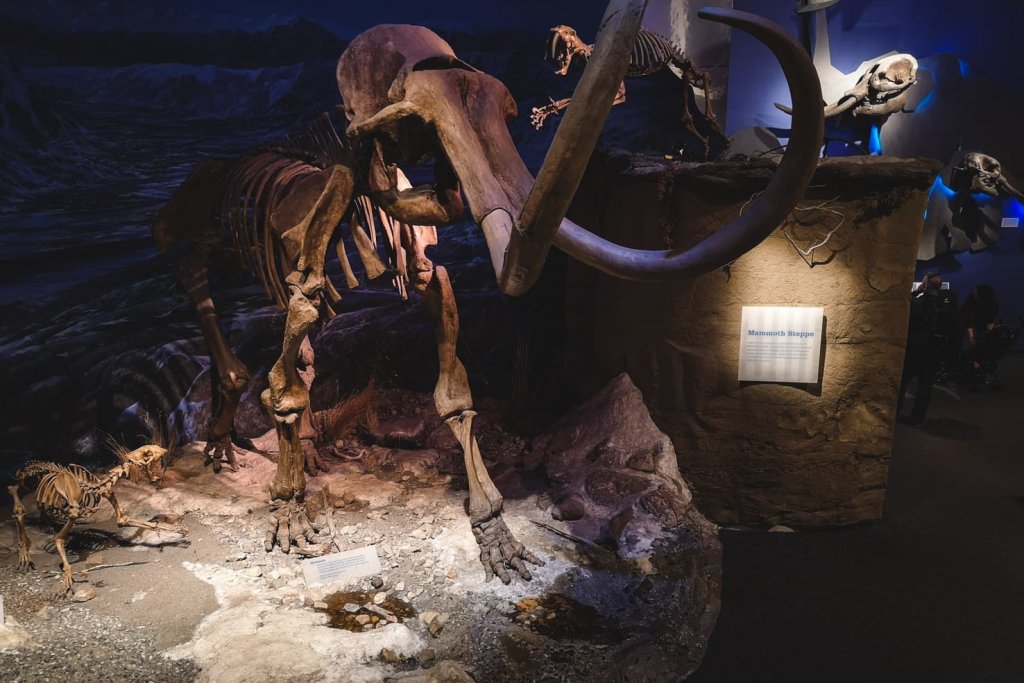 2| Hide from bandits in the Horsethief Canyon

The name of the canyon is based on a legend. When early settlers came to the area, and ranching became a primary industry, thieves stealing thousands of horses used Horsethief Canyon to hide and rebrand them here. 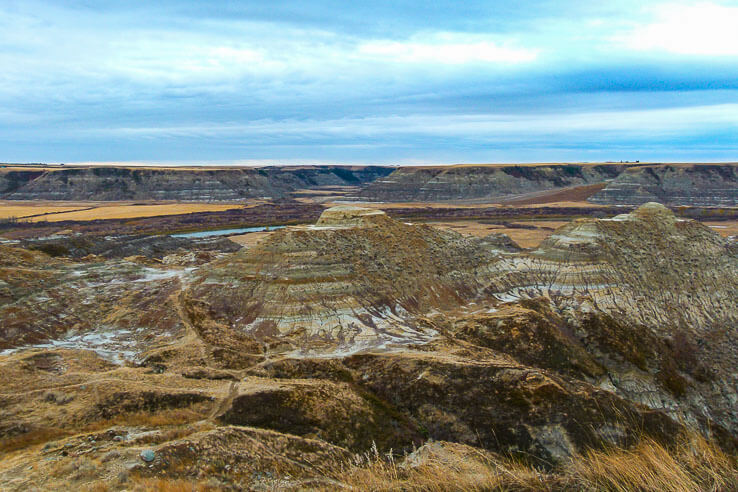 Nowadays, it‘s still used for hiding from civilization as it was used to, more than a century ago. There is a viewpoint by the parking lot to see the sedimentary layers or you can even hike down and explore the canyon on your own.

It gives the impression that you‘re hiding from bandits as the only person in the canyon. Make sure you know where you came from if you decide to hike. It’s surprisingly easy to get lost. 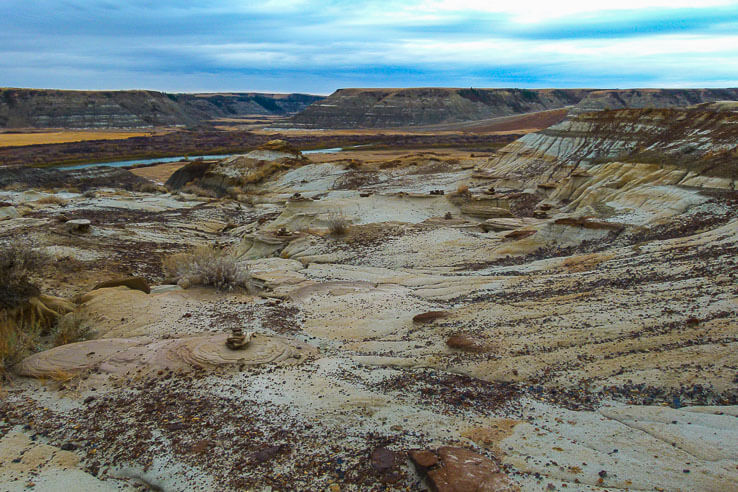 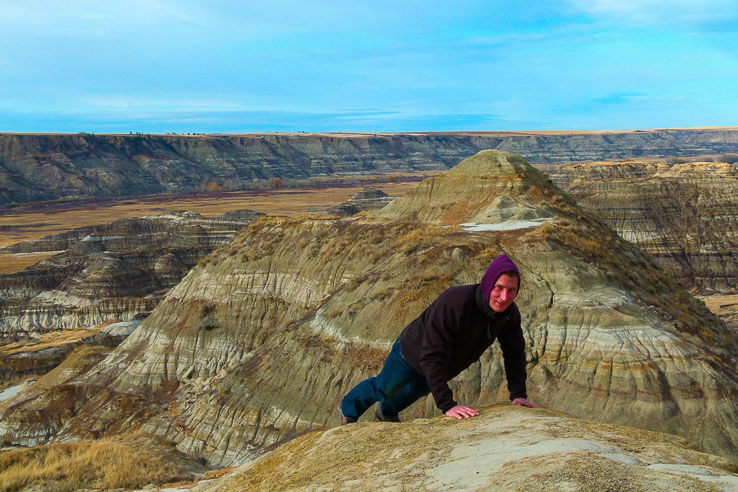 3| Climb up the World’s Largest Dinosaur

As soon as you see Dinosaur, you know you’re in Drumheller. That’s right. Model of Tyrannosaurus Rex in the centre of Drumheller is 25 metres high (4,5 times bigger than a life-sized dinosaur), visible from almost every corner of the town. 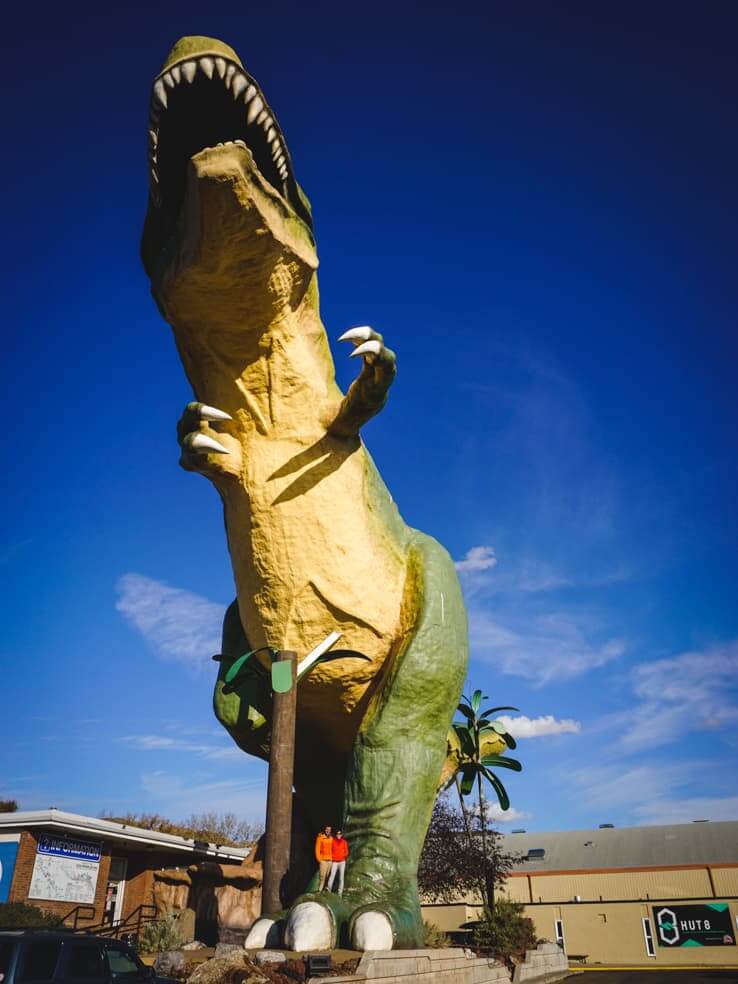 Want more? You can climb up the World’s Largest Dinosaur from inside and up to its jaw to the viewing platform. It’s open year-round, the admission costs 4 CAD per person. 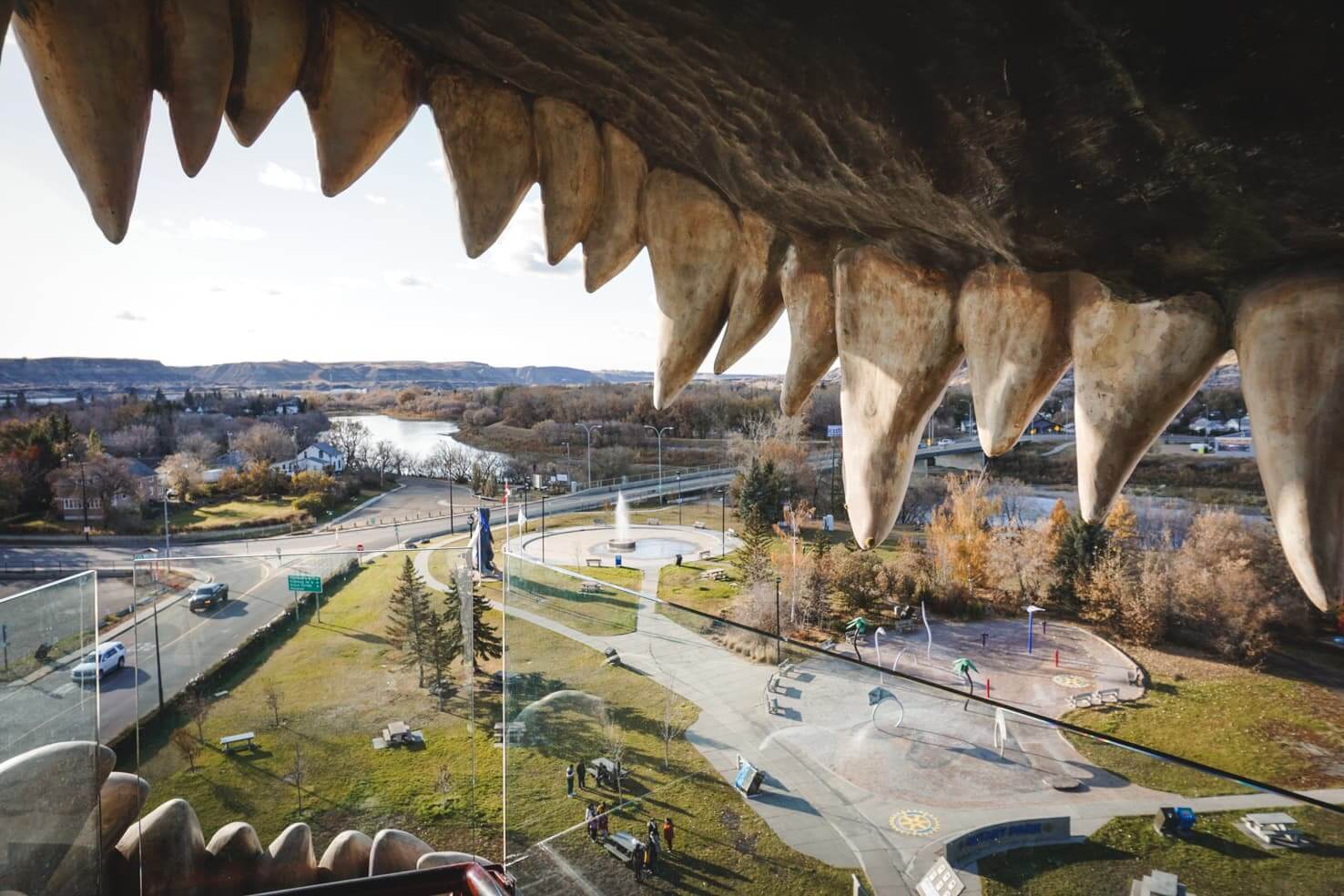 4| Hike in the Horseshoe Canyon

Driving from Calgary, the Horseshoe Canyon lies shortly before you reach Drumheller. You can admire the canyon from the lookout or descend about 60 meters into the canyon for a hike.

I wouldn’t recommend going hiking if it’s wet because the steep slopes are so muddy and slippery, you won‘t get out of there. This happened to some tourists when Michal was in the area for his work. He had to rescue them out of the canyon with a rope. 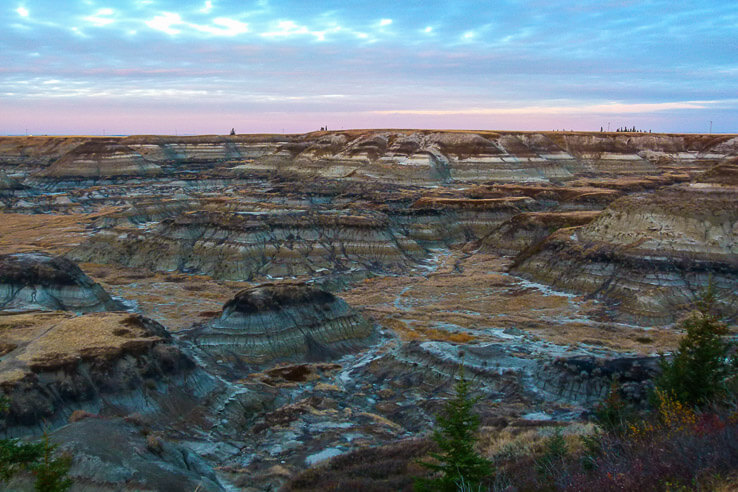 If you’ve traveled in Canada, the US or Turkey, you might have seen hoodoos before. Hoodoos are geological formations of sand or soft rocks, formed into tall, thin towers. 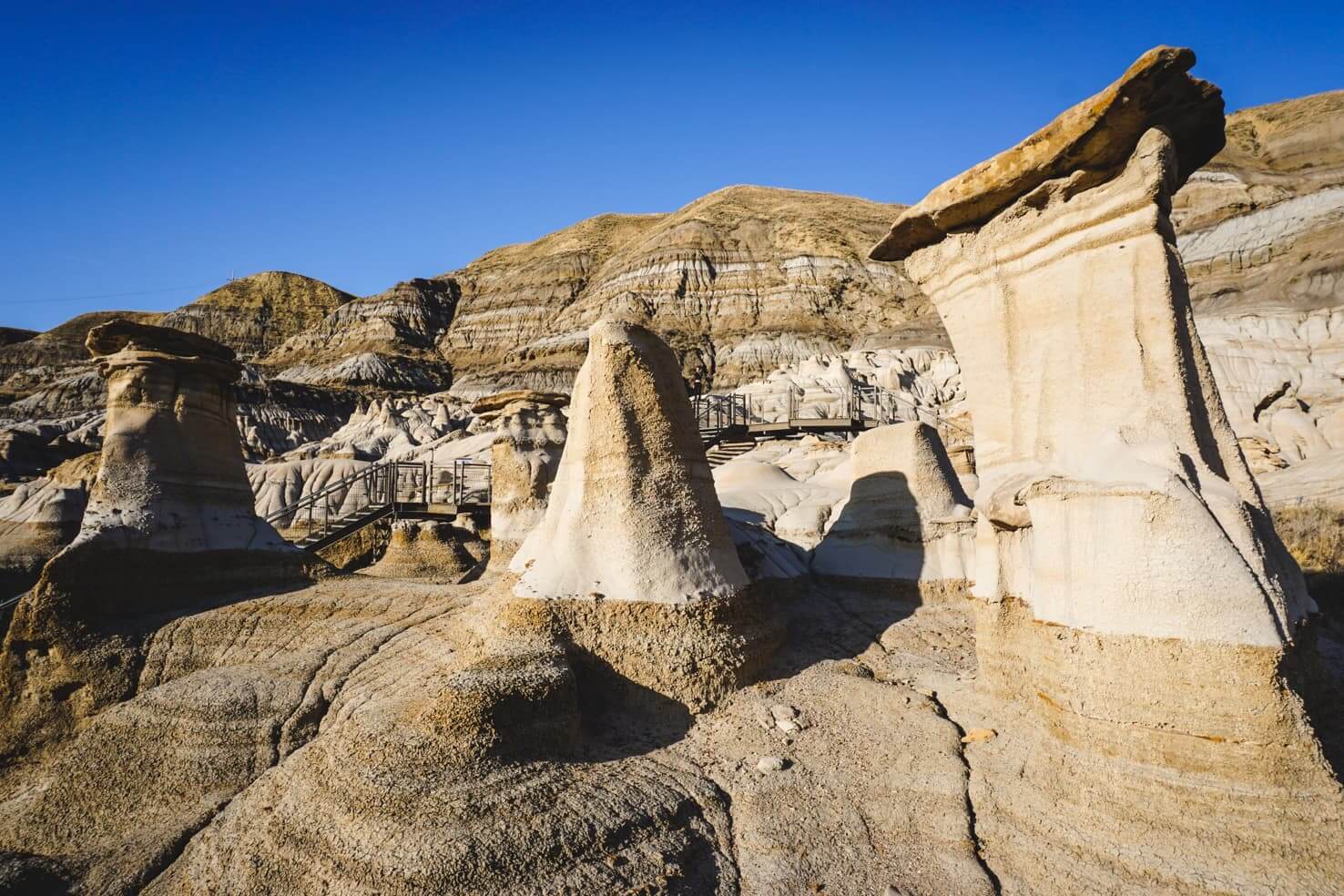 They’ve been formed into each location-specific shape by erosion over thousands of years. Hoodoos in Drumheller are icons of the Alberta badlands. Hoodoos Trail is another popular and scenic Drumheller hike. 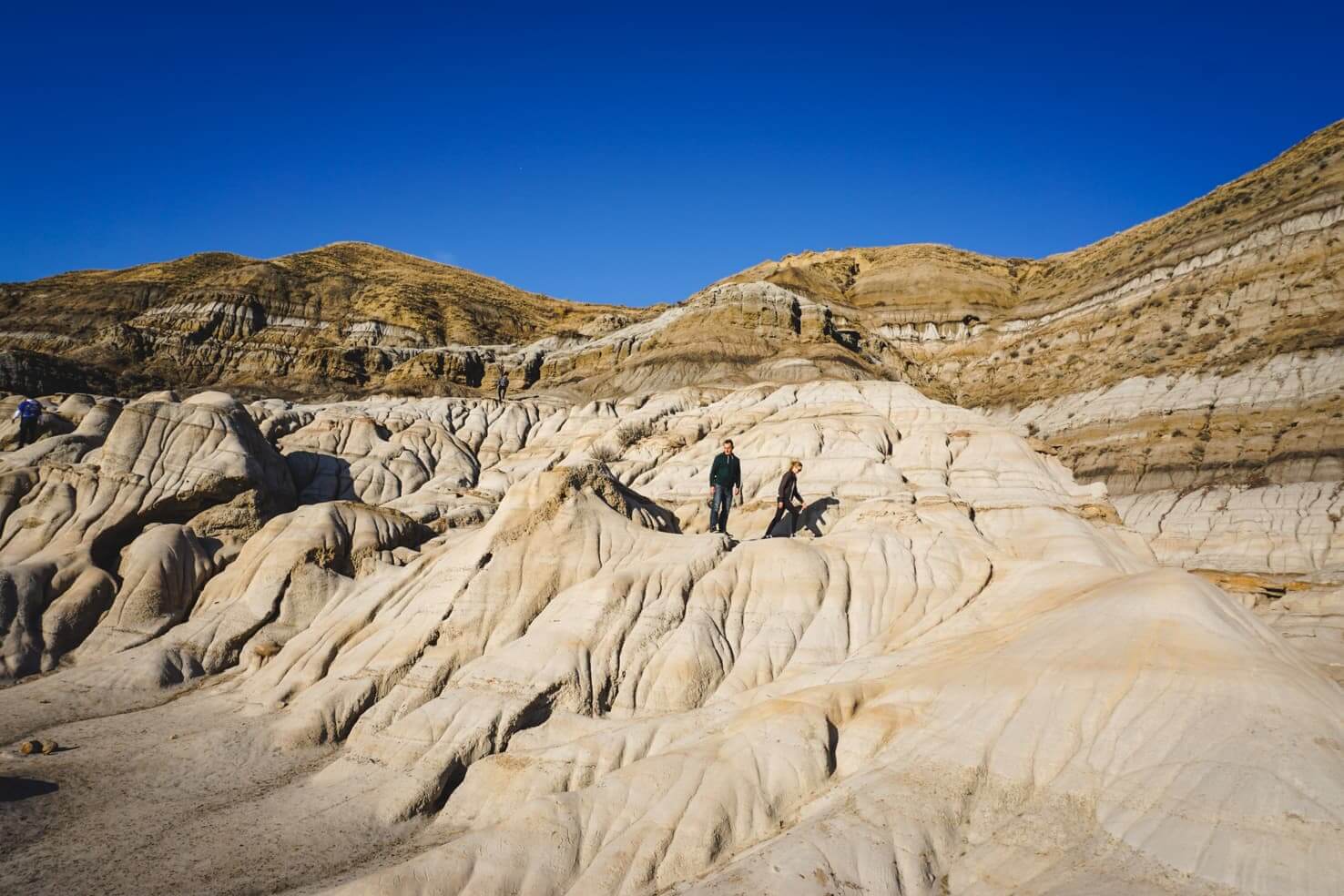 From Drumheller, head east on Highway #10. After passing Rosedale, you will shortly see the sandy towers on your left. Some towers are fragile and fenced, but there’s plenty of space to walk around the hoodoos. You can even hike up the hill to see them from above.

TIP
Intestested in more history-oriented trips in Alberta? We recommend a road trip through southern Alberta. 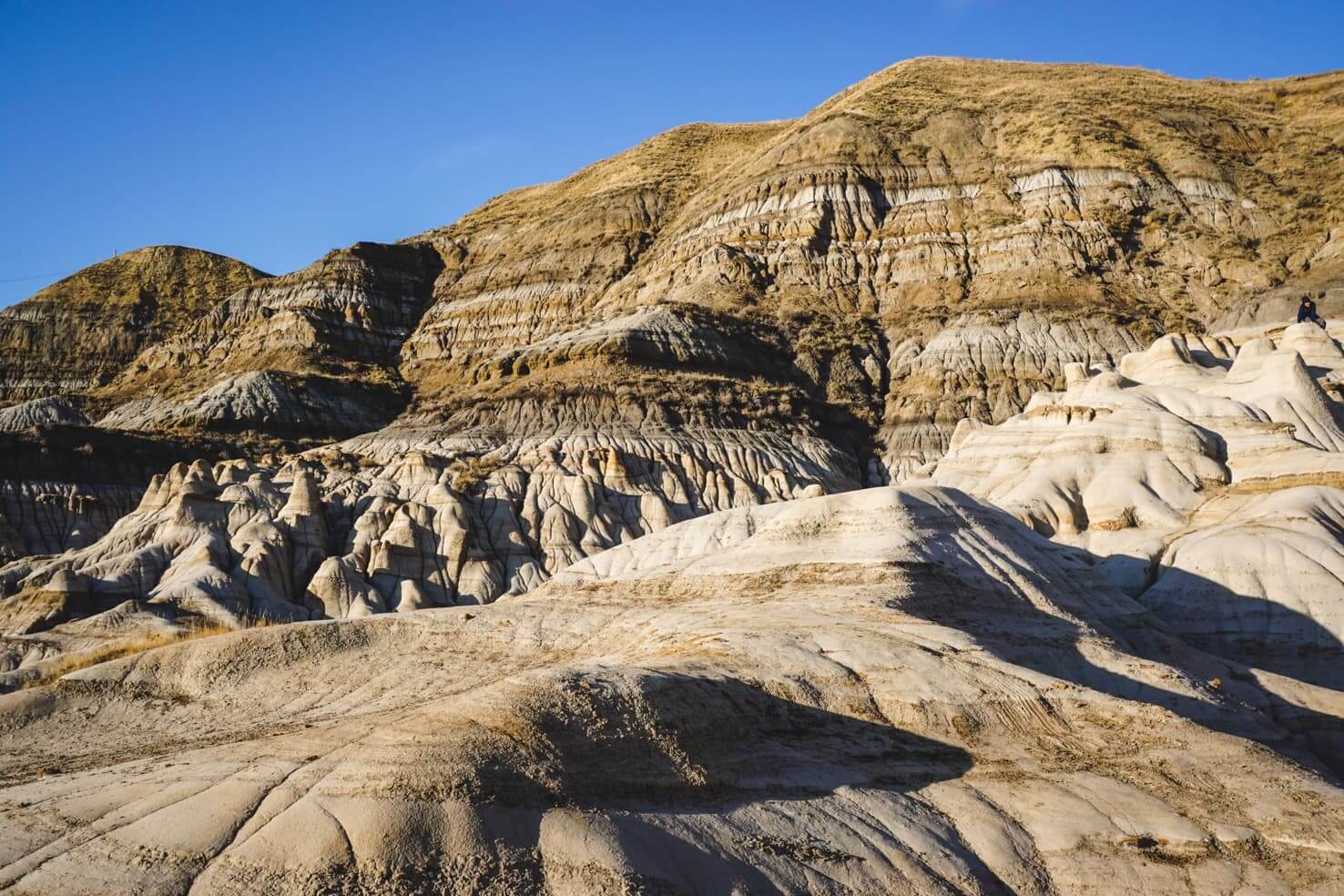 East Coulee is a tiny ghost town with 160 residents and coal mining history. Self-guided or guided tours are available at the historic School Museum from 1930. Talk about traveling back in time, right?

Imagine attending the school a hundred years ago and don’t forget to visit their Tea Room for delicious snacks. The museum is opened seasonally May to September, and the admission is 7 CAD per person.

7| Walk across the Star Mine Suspension Bridge

Driving around 10 km southeast of Drumheller, you will arrive in Rosedale, an important coal mining historical site with more than 100meters long suspension bridge. It was built in the 1930s for coal workers of Star Mine. You can walk the bridge, crossing Red Deer River, and learn about the mining history of Drumheller valley. 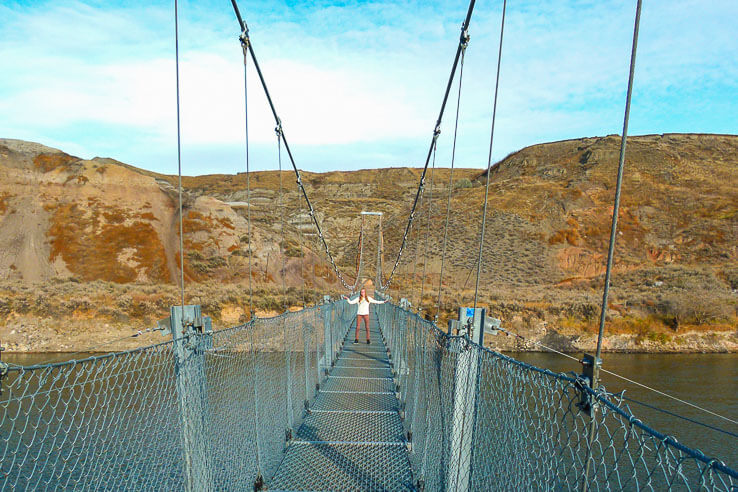 If you feel like Drumheller is „too modern“, wait until you visit Wayne. From Rosedale, head southwest and cross 11 bridges that span the Rosebud River. Known as ‘11 Bridges to Wayne‘, they hold a Guinness Record for most bridges crossed within a short distance. 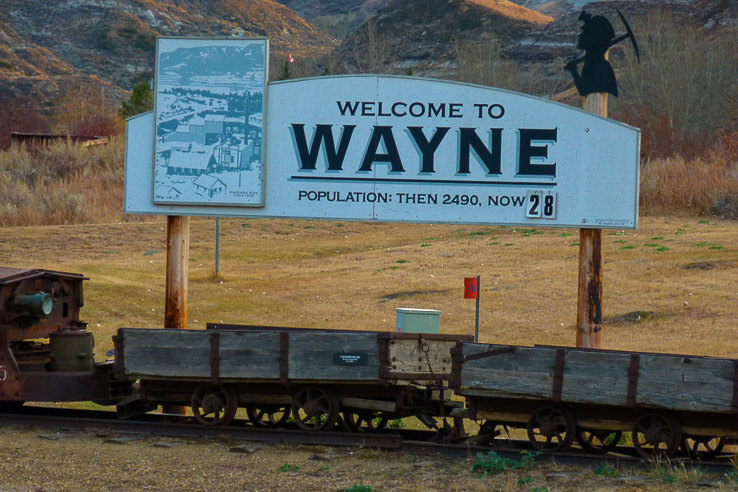 Deep in the badlands, home of numerous coal mines, lies a village of Wayne. Abandon homes and machinery along the way will give you a hint of a coal mining history.

You can spend a night in a historic hotel or recharge at Last Chance Saloon with burger, drink and live music. Classic western saloon with bullets from the pistol in the wall celebrated their 100th anniversary in 2013. 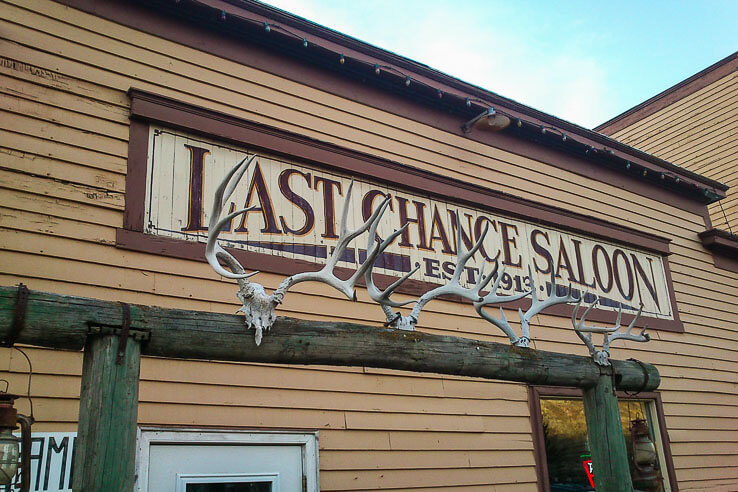 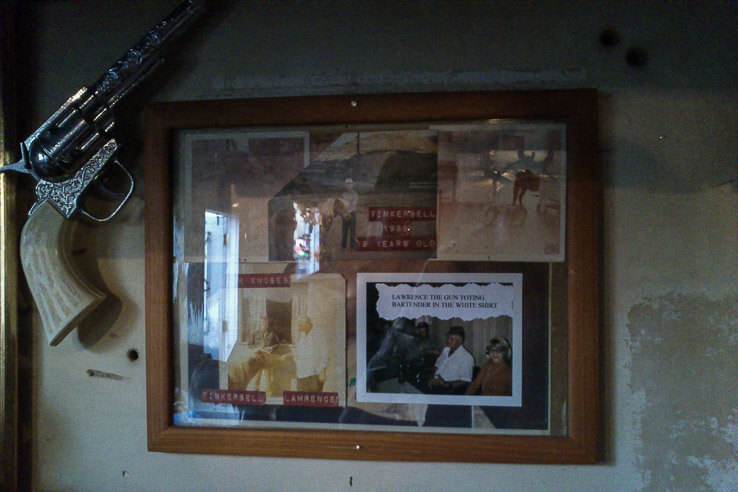 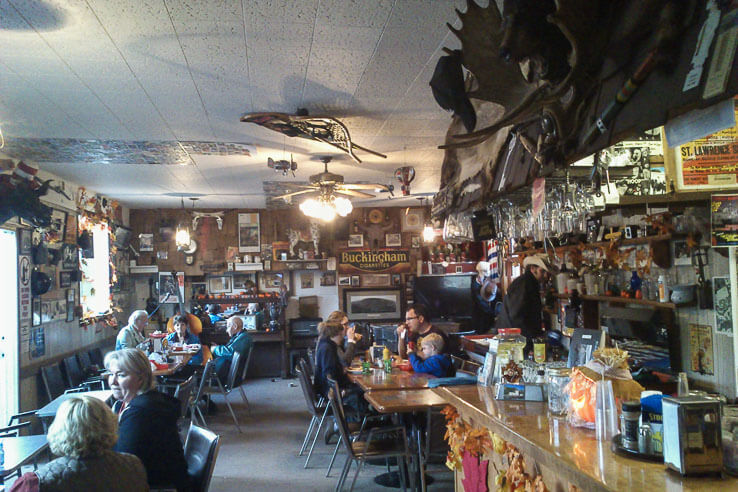 From the 139 coal mines located near Drumheller back in its coal mining days, one of the biggest was Atlas Coal Mine. Located 20-minute  drive southeast of Drumheller, you can now visit the site and explore its underground mining tunnels.

They offer several guided tours, including a train ride or a tunnel tour. It’s open seasonally from mid-April, and the admission starts at 12 CAD per person.

North of Royal Tyrell Museum and Horsethief Canyon is a unique cable Bleriot Ferry. It carries passengers across the Red Deer River since 1913. The river is 105 meters wide, and the ride takes 8 minutes. It operates from mid-May to mid-September. Find the ferry schedule here.

Over 40 movies and series were produced in Drumheller, mostly Westerns. The most famous one being a western movie Unforgiven from 1992 directed and starred by Clint Eastwood. Some scenes from the famous Revenant with Leonardo DiCaprio were filmed in Drumheller as well. 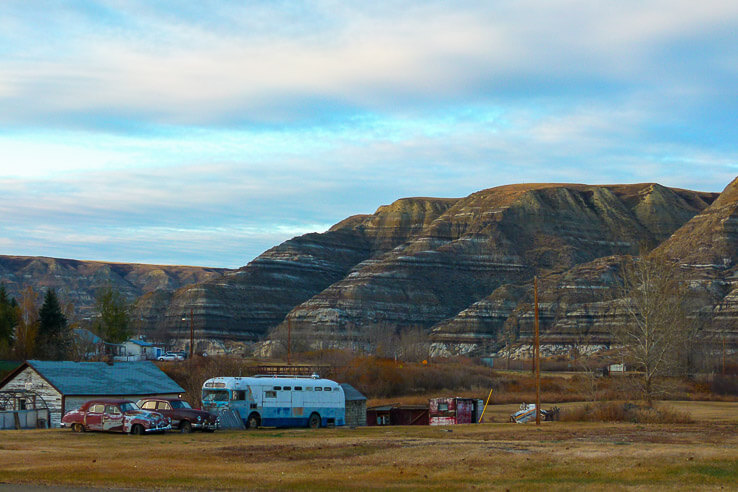 The most popular movies filmed in Drumheller

Other movies filmed in Alberta province 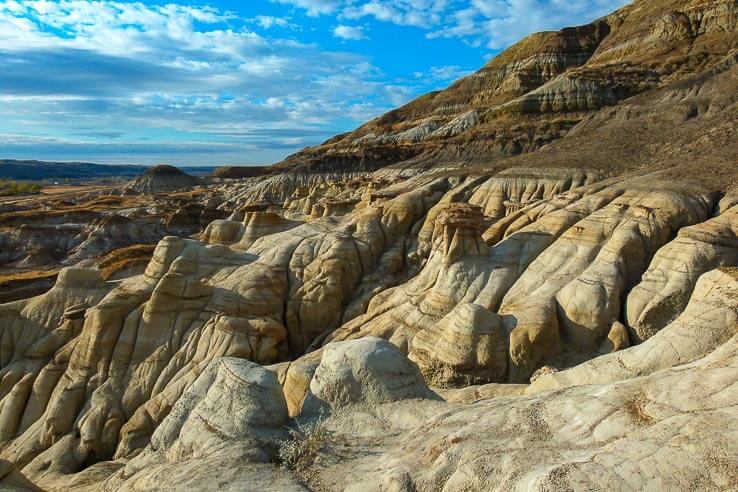 Do you like visiting small towns? Check out our travel guides for:

*In the spirit of full disclosure: Some links in this post are affiliate links, which means that if you purchase through them, we receive a small commission at no extra costs to you. We appreciate your support!

Have you ever seen hoodoos before? Would you like to visit Drumheller and be transported into a western movie? 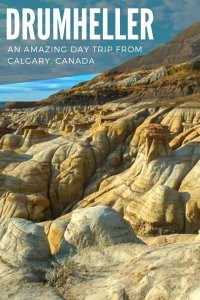