El Salvador is the smallest country in Central America and by far the most densely populated. With 25 volcanoes, 14 lakes, popular surfing beaches and Mayan ruins, it offers many things to do for travelers. The traditional culture of countries further north is gone; El Salvador is a westernized country. Read our list of the most interesting facts about El Salvador and learn something new today. North-western parts of El Salvador were the southernmost borders of Mayan Empire. Mayan Ruins in El Salvador are most southern ever discovered and much smaller compared to Guatemalan or Mexican. They are usually located in modern towns between new houses. Tazumal and San Andrés are most preserved of all. Former murder capital of the world

In 2015 El Salvador was the country with the most homicides in the world with the numbers exceeding murder rate in war zones. Since then it lost the infamous title to Venezuela. On the other hand, tourists will feel much safer in El Salvador compared to its neighbouring countries. Armed police are visible in every public place and armed security is common in bus stations and stores. Rainy season between May and October, called winter by locals, is the hurricane season in the Caribbean. Best time to visit El Salvador is during regular winter in northern hemisphere months December to April. El Salvador is the smallest country in Central America by size and the only one with no access to the Atlantic Ocean. One of the reasons why you won’t find any descendants of Afro-Americans. But you will find here 5 National Parks which protect the biodiversity of El Salvador. The country has 25 volcanoes, two of them are currently active. Hiking the highest volcano in El Salvador, Santa Ana volcano is a great opportunity to hike up an active volcano and one of a kind as compulsory police escort and a guide are leading tourists up the trail. Joya de Ceren, Mayan ruins which belong to UNESCO World Heritage, were buried after the eruption of a volcano. Another name for this site is “Pompeii of the Americas.” Coatapeque and Ilopango lakes have a volcanic origin. Two of the biggest lakes in El Salvador are great holiday resorts. Coatapeque Lake is one of the beautiful lakes in the world. Ilopango Lake is a popular vacation destination for locals. Ilopango volcano’s eruption is the probable cause of the strong “volcanic winter” which resulted in world famine. Almost no sun was shining for two years in the 6th century. A tension between El Salvador and Honduras started during a football game in 1969. Although the name “Football War” suggests the reason for the war was a football match that is not the case. The main reason was that Honduras forced El Salvadoran immigrants to return back to El Salvador which gave El Salvadoran army a reason to attack Honduras. The war has ended after 4 days hence 100 hours. In translation “Route of Flowers” is about 40 km stretch of paved road between Sonsonate and Ahuachapan in northwestern El Salvador. Visiting between October and February will justify its name as wildflowers along the road will be in full bloom. Most importantly, this short road gives you a great view on El Salvador’s traditions, history and colourful colonial towns in the coffee growing region. Most tourists come to El Salvador for surfing and beaches. Waves break with the pattern at the same spots and prices for surfing schools are a fraction compared to its neighbours. Beaches are also nesting place for four types of endangered turtles. Traditional local dish in El Salvador is pupusa, a delicious form of tortilla with round dough filled with varieties of filling. Usually with bacon, spinach, beans, mushrooms, chicken or cheese filling. This food was eaten by locals long before Spaniards came. They fill you quite fast so please don’t order half dozen just for yourself. El Salvador doesn’t use its own currency. They adopted US dollar instead of Salvadoran Colon. Since 2001 when the government allowed circulation of US dollar, Colon was removed. Locals can still pay with Colons and if you get lucky you might be able to find some bills. Thanks to dollar San Salvador is filled with American chain restaurants. It also makes it much easier for travelers who usually bring US dollars to travel around Central America.

15 interesting facts about Nicaragua for travelers

Guns and danger – the truth about traveling in El Salvador

Month 3 recap of our RTW trip

El Salvador has a lot to offer for such a small country. Have you learned something new? 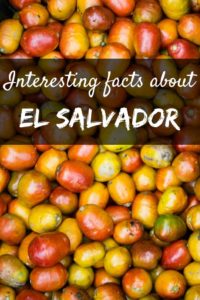 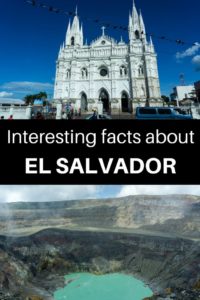