Boat crossing from El Salvador to Nicaragua is one of the most enjoyable ways we’ve ever crossed the borders. We enjoyed the beautiful day on the ocean and were warmly welcomed in La Union, El Salvador and Potosi, Nicaragua which don’t see many visitors.

If you would like to make a border crossing an adventure, getting from El Salvador to Nicaragua by boat is the best way to go. Rather than dragging through several borders wasting the whole day, you’ll be traveling through the former pirate waters and see Nicaragua, Honduras and El Salvador from the ocean at the same time!

Plus, you can explore lesser known places such as La Union in El Salvador and Potosi in Nicaragua – starting and finish point of the boat ride. Crossing borders in Central America is usually a very tedious process. It’s hot, uncomfortable and takes a long time, sometimes 12 hours. That sounds horrific if you ask me, but there are a few exceptions where you can avoid it and actually enjoy the border crossing.

One of them is crossing the Mexico–Guatemala border by boat and then through the jungle. The other is from El Salvador to Nicaragua, which is not crossing per se. It’s a boat ride that takes 1,5h instead of a 6-12hour bus ride and hassle at El Salvador-Honduras border and then Honduras-Nicaragua border. Getting to La Union, El Salvador

We arrived in La Union from Santa Ana. First, we took a bus from Santa Ana to San Salvador where we caught a bus to La Union. I was intrigued by the capital and its very friendly and helpful locals. San Salvador is the most dangerous city in El Salvador which used to be the murder capital of the world but lost it to Honduras.

It’s not as bad as it sounds. Most of the incidents happen between the gangs and visitors are advised to avoid these areas of the city. We had to ask several times on the street of San Salvador how to find our bus station and were met with smiles, curiosity, and help from locals. Once we found it, a local man noticed our confusion at the busy terminal and directed us to the right bus without even asking for help. These are the real Salvadorians. By this time we were accustomed seeing guards with rifles everywhere we go. However, this bus station took it to another level. It was guarded by policemen with rifles dressed in bulletproof vests and balaclavas.

3 hours later we arrived in La Union. It was Friday afternoon and we hoped to find a boat that leaves on Saturday morning. We left our bags in the first hotel we found and went for a “boat hunt”. There are two boat options how to go to Nicaragua, either with a fisherman or with a private boat. We only had to go to the port and ask around.

Border control officer gave us a phone number for Mario to ask about the boat transfer. We didn’t understand who Mario was, but apparently someone who could help us. As much as we tried, our Spanish was not perfect. The hotel receptionist refused to allow us a phone call to a cell number (only landlines were allowed, weird), we were left with no options to call. So we went to the port again and asked everyone who was around – fishermen, policemen and random locals. These are the answers we got: there is no boat on Saturday to Nicaragua; there might be a boat on Sunday; maybe on Saturday at 7:30 or 8:30 am. We went to the border control officer again and were told that boats usually leave at 6:30 am.

We decided to go for a dinner and buy some snacks for the journey we were hoping for the next day. The only thing we could do at this point was going to the port in the morning and ask fishermen. Are we leaving El Salvador?

Timeline of our morning:

6:00 arriving at the port, there was no boat…maybe we were late? 7:00 whatever boats were there probably left before we came to the port. Michal went back to our hotel for wifi to check if the private boat could take us to Nicaragua. Despite the cost 65USD per person, we would take it.

7:15 the WhatsApp call didn’t work so Michal sent a message. I bought some fruit from the street vendor to freshen up the hot day.

7:40 an old lady arrived with a cooler but said she wasn’t going to Nicaragua. Border control officer came out and said the cooler was for Mario. Ok, so Mario, whoever that is, is coming. Maybe he could take us to Nicaragua.

7:50 I was so bored that I made a new friend from El Salvadorian military. 8:10 the local man came again and tried to convince us there is no boat leaving for Nicaragua and he could take us for only 100USD per person. No, thank you.

8:20 a man whom Michal sent a message to came and said we were lucky because they usually don’t do transfers to Nicaragua on Saturdays. He left to clean the boat. We waited who comes back sooner – the man with the private boat or Mario.

8:50 Mario, who we found out was a boat captain, came and said he could take us to Nicaragua. As it turned out, the man with the private boat and Mario are working together on the same boat providing transfers. Without any haggling effort, they offered us a better price – 55USD per person.

9:00 we went to the border control officer again, for the last time. He browsed our passports for a while and gave us an exit stamp from El Salvador.

10:00 our boat with 4 men crew, one American passenger and us, finally heading to Nicaragua. Gulf of Fonseca – boat ride through the pirate waters

Enjoying the ocean breeze on the boat and seagulls flying over us, we waved El Salvador goodbye. We left with wonderful memories from this tiny Central American country. Where waste management needs improvement, people are poor but have big smiles and typical relaxed life attitude “if you miss this bus, the next is coming” – meaning there is no need to rush, you will get where you want to go even if it takes some time. Something that western cultures could learn from.

The ocean was calm and the ride smooth. Some of the crew spoke English and we could give our brains a break from Spanish. We learned about the presence of pirates in the past and the dispute over the little islands we passed.

Just 1,5h later we were near the Nicaraguan shore with dock a little too high for our boat. No problem, shoes off and hop off the boat. I haven’t even realized when my feet touched the water it was so warm. Hard to say if the ocean was warmer or the air. Black sand beach made from volcanic ashes was filled with grazing goats. And few horses were grazing near the immigration office. We watched the horses while immigration officer reviewed our immigration cards. We paid a fee of 684NIO (22USD) for visas. Boom, stamp in the passports and we were officially in Nicaragua. What a day! And it wasn’t over yet.

Read our story about Potosi, a little town that tourists don’t visit, why it is a real shame and what it can offer to its visitors.

Are you heading to Nicaragua or El Salvador? Contact Ruta del Golfo for once in a lifetime border “crossing” experience. You can go from El Salvador to Nicaragua or vice versa either by private shuttle bus or public transport for about 30USD. It will take you from one touristy place to another and the transport can take anywhere from 6 to 12hours.

Or you can enjoy off the beaten path places such as La Union in El Salvador, Potosi in Nicaragua and travel by boat through Gulf of Fonseca for 65USD in about 2 hours. Cheaper is not always better. Your choice, happy travels!

Have you ever travelled without plans what to do next and left it up to faith? 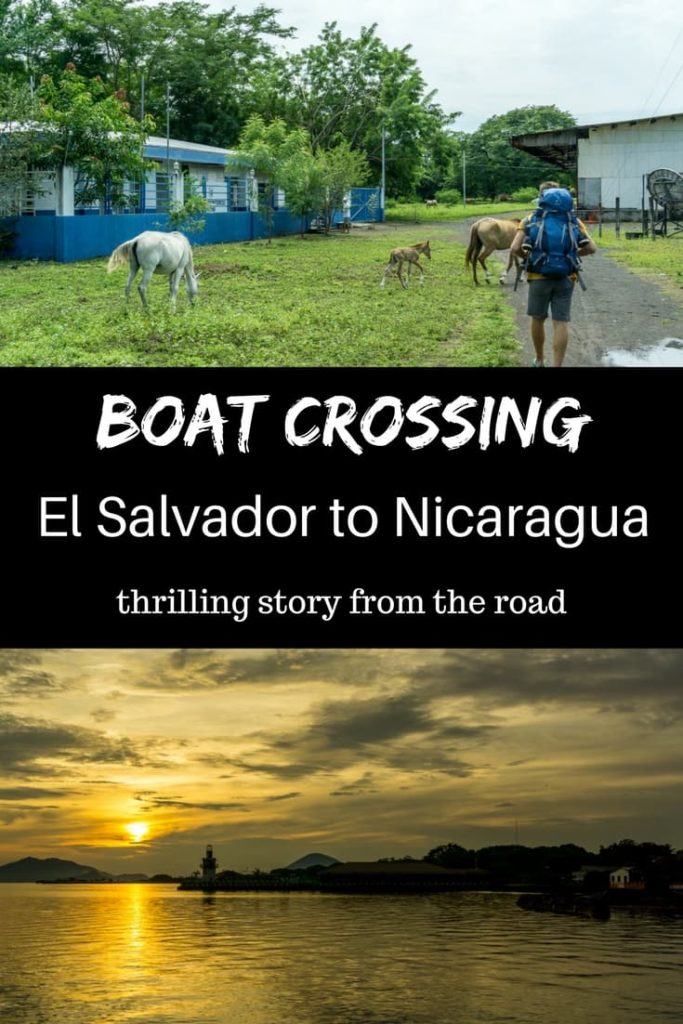 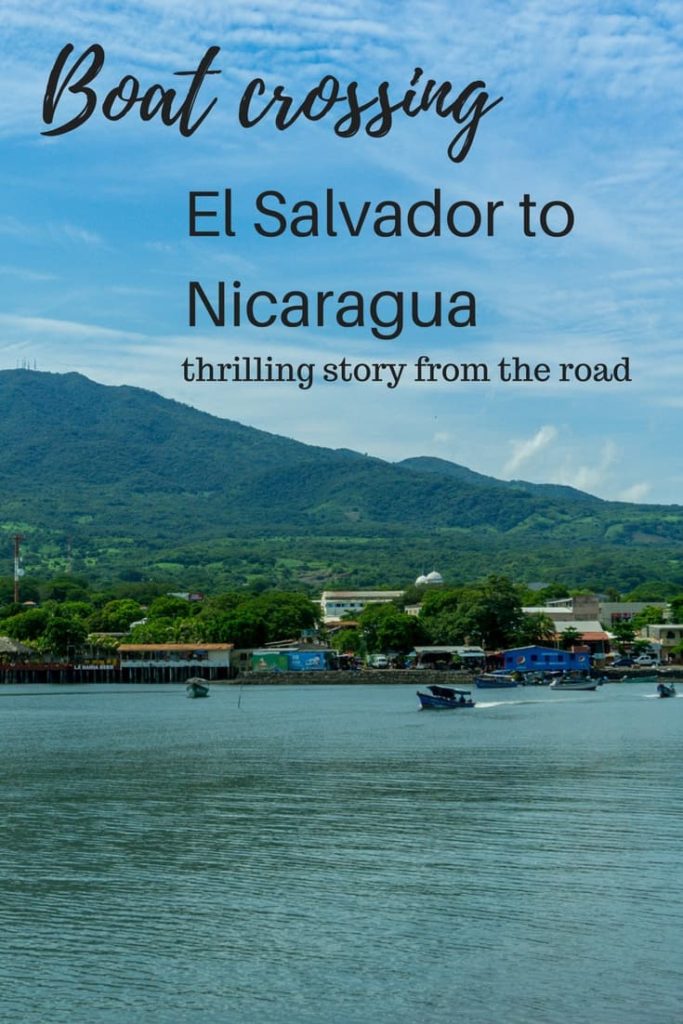