15 interesting facts about Nicaragua for travelers

Nicaragua is the largest country in Central America and the most overlooked place. With eastern Caribbean side, many volcanoes, lakes and colonial towns on the west side, it’s becoming a popular tourist destination. Learn some interesting facts about Nicaragua and you will want to start planning your visit.

From hiking volcanoes, surfing camps, kayaking on Lake Nicaragua or enjoying the quietness and blue crystal clear waters of Caribbean Sea, this amazing country is full of surprises. Nicaragua belongs to the Ring of Fire, an area in the Pacific Ocean with common earthquakes and volcanic eruptions. Most popular volcanoes among visitors are Masaya volcano – where you can watch the lava flow, Volcan Cosiguina with picturesque crater lake, Cerro Negro – youngest volcano in Central America popular for sandboarding, Maderas and Ometepe volcano for hiking to the top. Who would have guessed that baseball is a national sport of Nicaragua? Most countries of Latin America watch football (soccer) and most famous sportsmen between Mexico and Chile are usually football players. Due to American influence in the Caribbean region, some countries are baseball lovers. More importantly, these countries usually beat Americans in their game. In late 19th century, Lake Nicaragua was an alternative place to connect Atlantic and Pacific oceans instead of Panama Canal. In 2014, Hong Kong-based company gained lease to build an alternative to Panama Canal but failed to raise the money. Who knows what will happen in the future. Nicaragua gained independence from Spain on September 15, 1821, along with other Central American countries – El Salvador, Honduras, Costa Rica and Guatemala. All countries celebrate independence on the same day. Nicaragua is a great place for surfing. On the Pacific coast, you’ll find more than 10 great beaches for surfing. Famous surfing spots are Sun Juan del Sur or Popoyo. Due to an increasing wave of surfers visiting, prices for surf camps are skyrocketing. To avoid crowds, Nicaragua has also spots where you can have the whole beach to yourself, for example, Jiquilillo beach in the northern part of Nicaragua. Lake Nicaragua covers a significant area of the country. It has some 430 volcanic islands, one of which is the biggest island on the lake, Ometepe Island. Island with two volcanos is a popular tourist destination. Don’t be surprised to see sharks in the lake as they travel from the Caribbean. Nicaragua issues visas on arrival but citizens of many countries around the world are only required to buy a Tourist Card for 10USD upon arrival. You are free to travel within Guatemala, El Salvador, Nicaragua and Honduras since they created free movement union similar to European Schengen system. Nicaraguans eat Gallo pinto almost every day. It is rice mixed with red beans. Nicaraguans claim it as traditional Nicaraguan food, but alterations of this tasty side can be found in many Caribbean and South American countries.

Eastern part of Nicaragua is very little populated and mostly covered by rainforest. Thanks to this, Nicaragua has the highest amount of forests in Central America. Monkeys, toucans, sloths and other animals are commonly seen. British ruled over parts of Nicaragua on the Caribbean coast. It got a really wicked name – Mosquito Coast. This part is not very developed and even the name suggests that it might be hard to live there. On the other hand, islands off the coast called Corn Islands are developing tourist destination with turquoise sea and a great place to chill-out. All of these regions speak English. Nicaragua doesn’t use street names or numbers. If you are looking for a certain place, the direction may look like this: 2 blocks north from the church and 3.5 blocks down the hill. A similar system is in Japan or used to be in South Korea. Have you ever thought about how turtles lay eggs and how small hatchlings get into the ocean? Nicaragua is one of the best places to see how people try to protect these creatures from extinction. There are two wildlife refuges – La Flor close to San Juan del Sur and Padre Ramos near Jiquilillo. Visiting the latter gives you the most authentic experience as it is less developed than partying backpacker’s hub San Juan del Sur. A massive earthquake, only one day before Christmas in 1972, killed more than 10,000 people. It happened right outside of the capital of Nicaragua, Managua. Since then there is no defined city center of Nicaraguan capital as people rebuilt city around the destroyed downtown area.

Have you learned something new about Nicaragua? Would you like to visit? 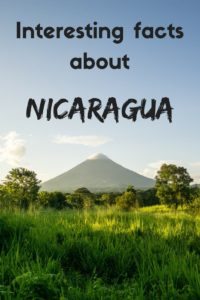 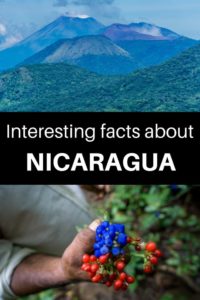