How Hitchhiking lead to a Happier Life

When we went backpacking around the world, I was excited to try as many new things as possible.

One of them was hitchhiking.

Asking strangers for a ride sounded like a fun way of getting to know the locals and their life.

A million questions went through my head. Is somebody going to give us a ride? What if we feel uncomfortable with the stranger driving the car? Are we going to wait for several hours? What if it’s pouring rain and we have nowhere to hide? Are we able to hitch a ride completely soaked? 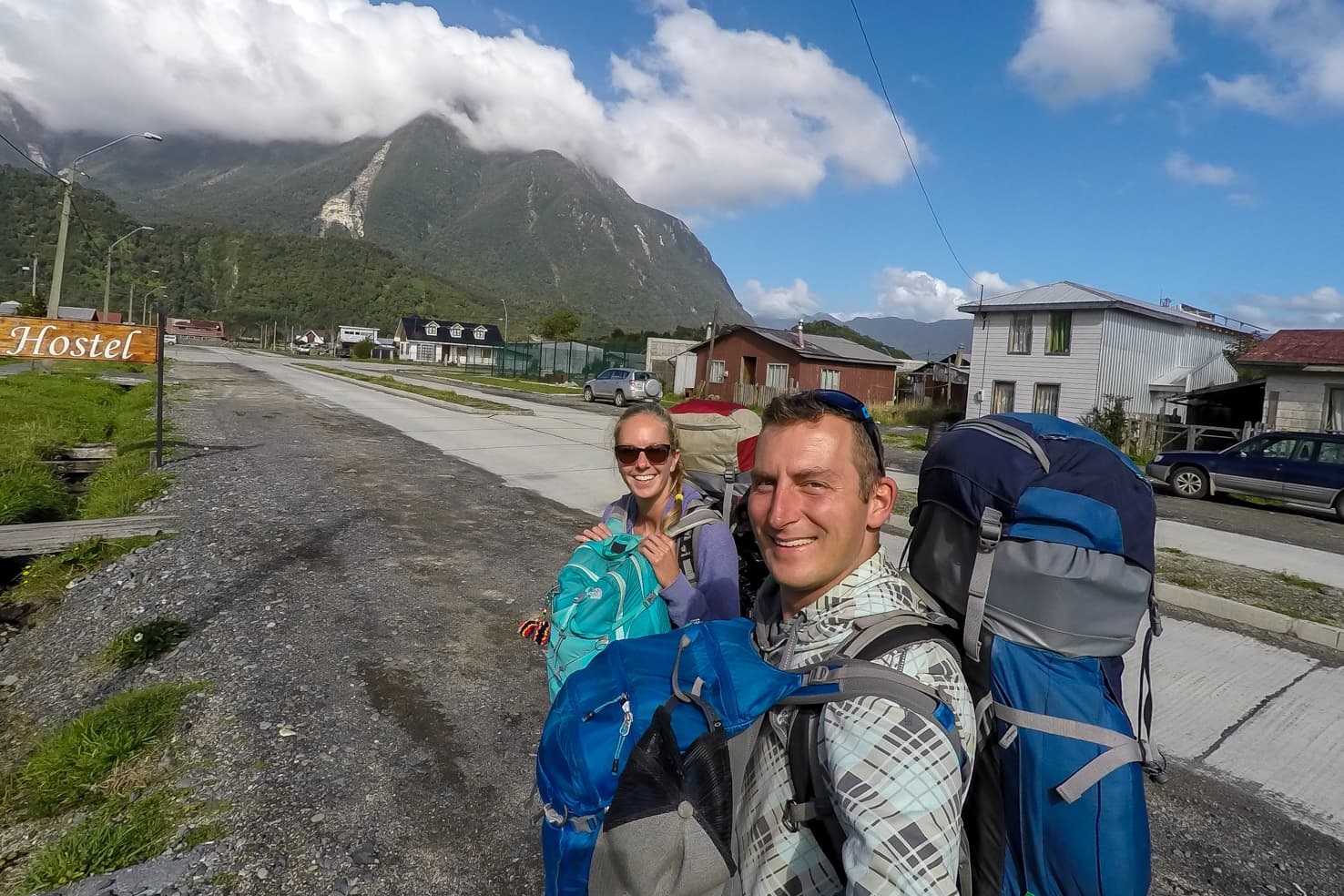 Once we arrived at the edge of Patagonia, all I felt were butterflies in my stomach. I had been waiting for this moment for years.

We were in Chile, at the beginning of a stunning road Carretera Austral, just about to start our month-long journey through breathtaking mountainous landscapes of Patagonia, when we did our first hitchhike.

Standing at the edge of the town of Chaiten, I put my thumb up. I wasn’t holding a cardboard sign with the next destination written on it. There’s only one road – and it goes south.

It was nerve-wrecking to smile at each car as they were passing by. I almost felt ridiculous and thought nobody would stop, and we would have to come back to the hostel and try the next day again.

When we saw a police car approaching, I got scared, sat down on my backpack and pretended to play with my camera. Michal encouraged me to return and put my thumb up, saying, you never know when the luck strikes.

As I was standing there, my sweat was getting out of control when the car got closer, and I was able to see their face. They just smiled and continued driving. 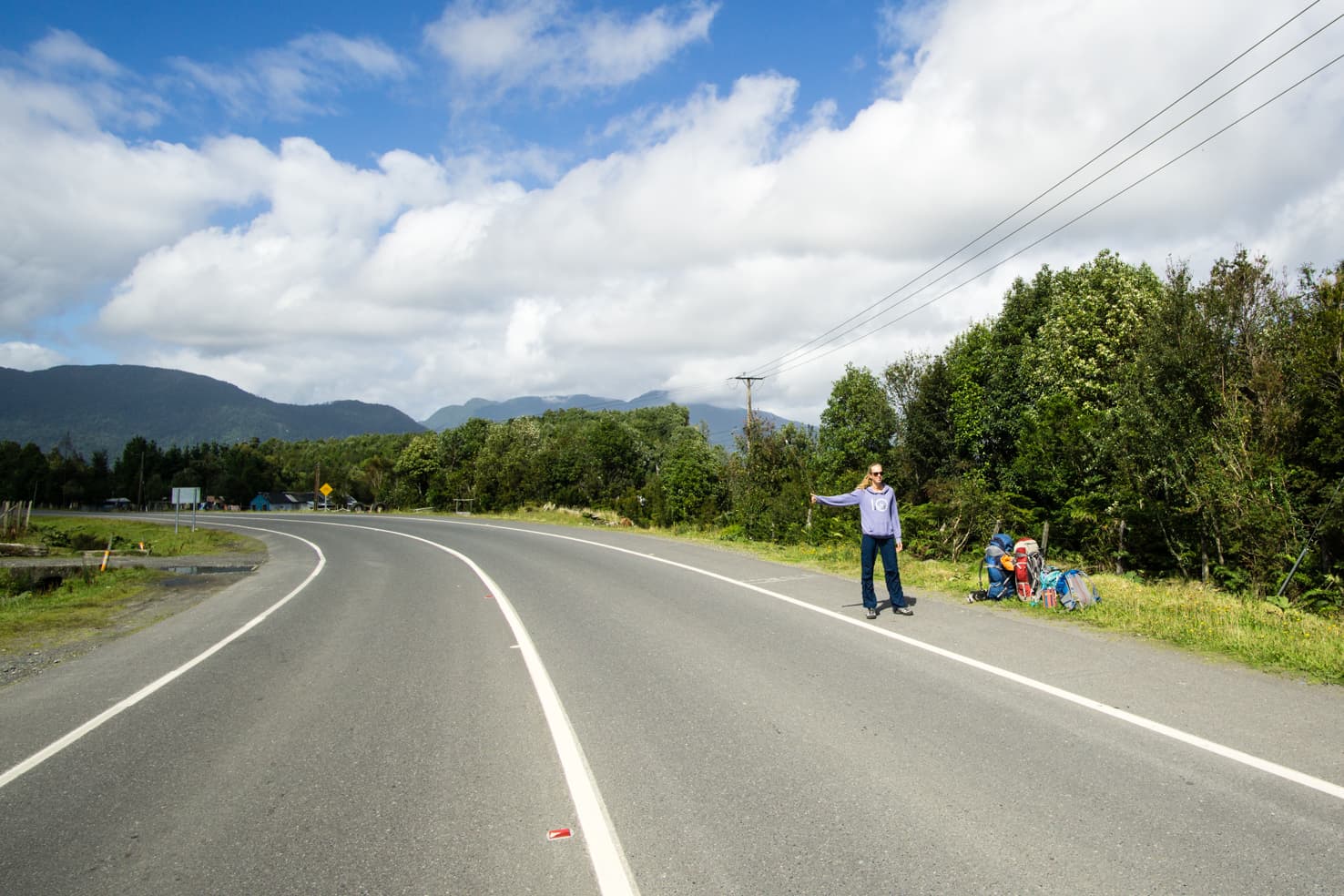 After an hour and a half, a young couple pulled over.

Gabriela from Chile was travelling with her Australian boyfriend, Scott. On the ride, she explained the new controversy around Pumalín Park, a private park that was owned by the founder of North Face. Having just passed away, the park was now going to be turned over to the Chilean government.

Locals were not happy about this decision. The park was very well maintained and free to visit while in private hands. Locals feared this would change dramatically because of the lack of funds from the Chilean government.

Gabriela and Scott dropped us off on the main road by Lago Yelcho, an empty part of Patagonia. There were no towns for miles.

Our road-side lunch consisted of delicious bread and butter, a sandwich, that would be our cheap, staple meal for the next two weeks. As I sat down to eat, I wondered if all our rides would be so fun and easy. We met amazing people and learnt something about Patagonia.

Lounging by the side of the road, few cars passed. I wondered if we should keep waiting or just set up a camp by the river. After three hours of waiting, an old, beaten up truck full of construction workers pulled over, signalling with a hand wave to hop in the truck bed. While workers were talking inside the truck, our open-air place was so loud we couldn’t hear each other.

As we rode down the bumpy dirt road, our clothes and wide smiles were getting dusty, and all we did was laugh about it. This was the experience we wanted. 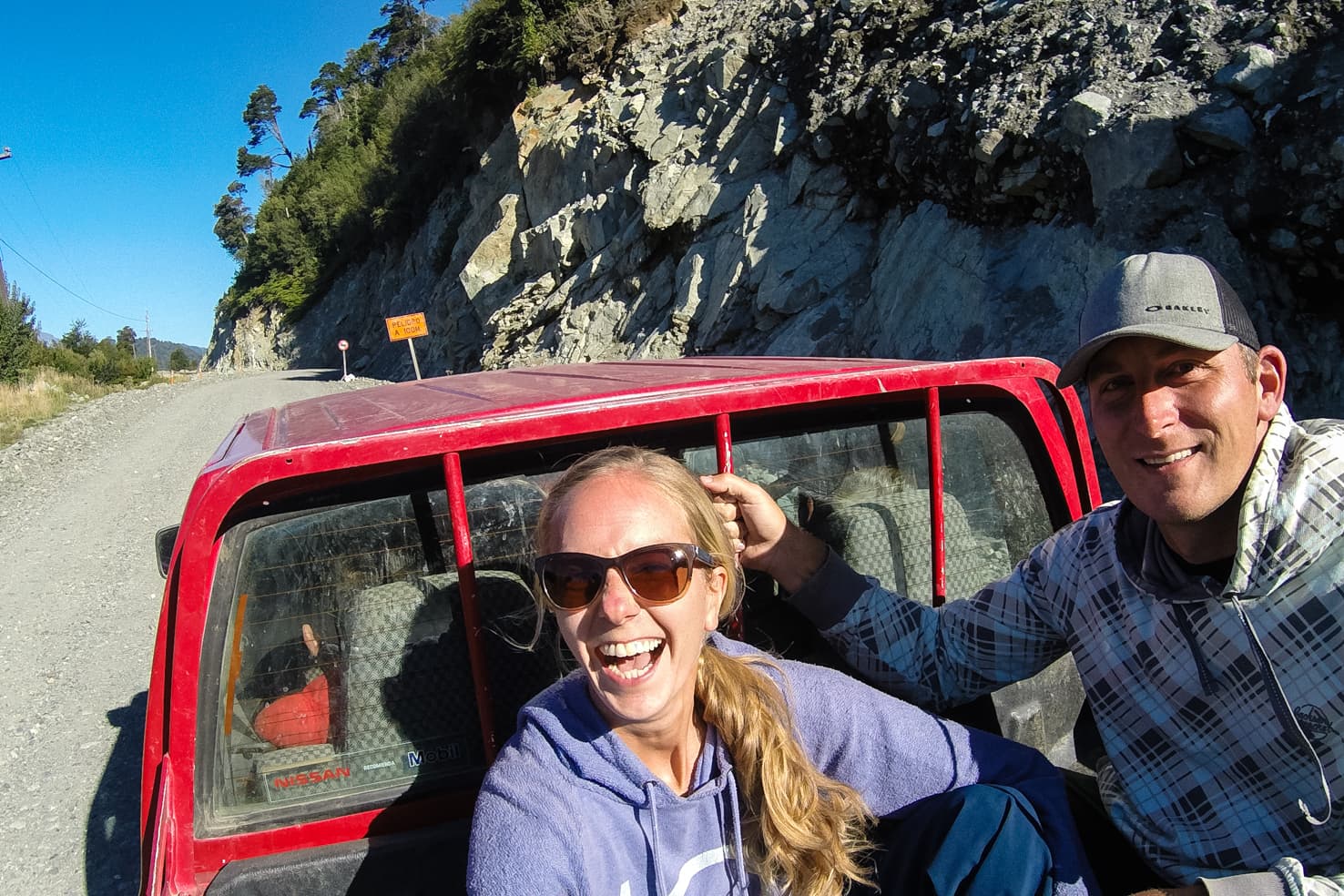 After an hour, the truck stopped in Villa Santa Lucia, and the driver signalled us to get off. They were continuing off the main highway and rightly assumed that we were continuing south on Carretera Austral.

It was evening and quickly getting dark. Villa Santa Lucia was our first night’s stop. Locals offered us their backyard to use as a campground and the nearby shed where we can cook. It was here that I realized the first lesson on hitchhiking: you never knew how far you’d get on any given day.

The night was cold, and we woke up the next day with a light layer of frost on our tent. We quickly warmed up in the shed while cooking water for our breakfast and morning tea. 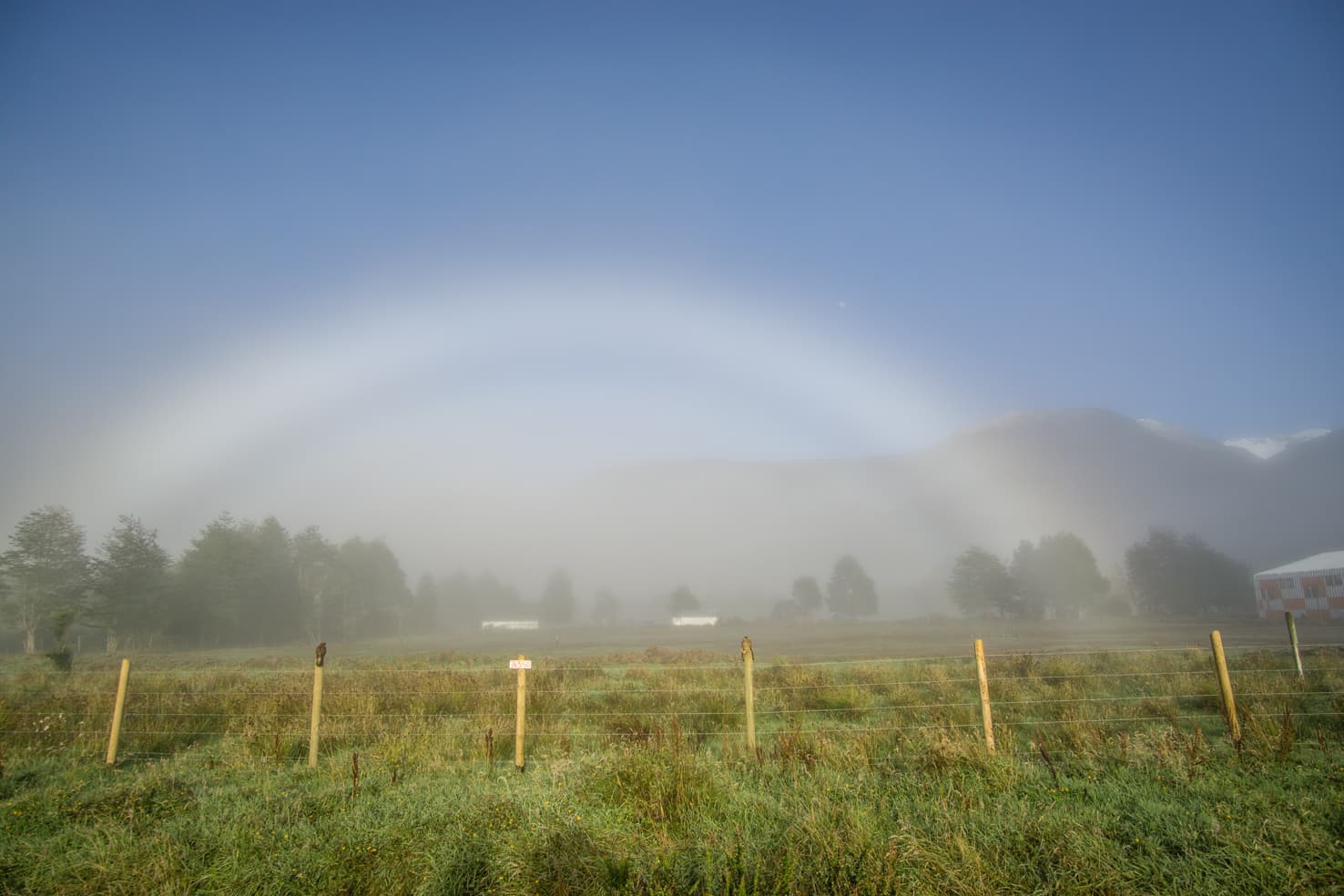 Villa Santa Lucia and the whole valley was still hiding under a dense fog, and the sun was slowly rising from behind the mountains. On the road, a couple of hitchhikers have beaten us already. We walked further down the road to adhere to the hitchhiking etiquette and let them be the first ones when cars pass by.

Our next ride was an older Chilean couple driving an RV. Kind lady Flaviola offered us a cake made of Calafate berries, a proud product of Patagonia. We drove with them all day long until our next stop, Queulat National Park. While paying the entrance fee, a young student Matias, who was working in the park, said we’re the first Slovak visitors to Queulat National Park. 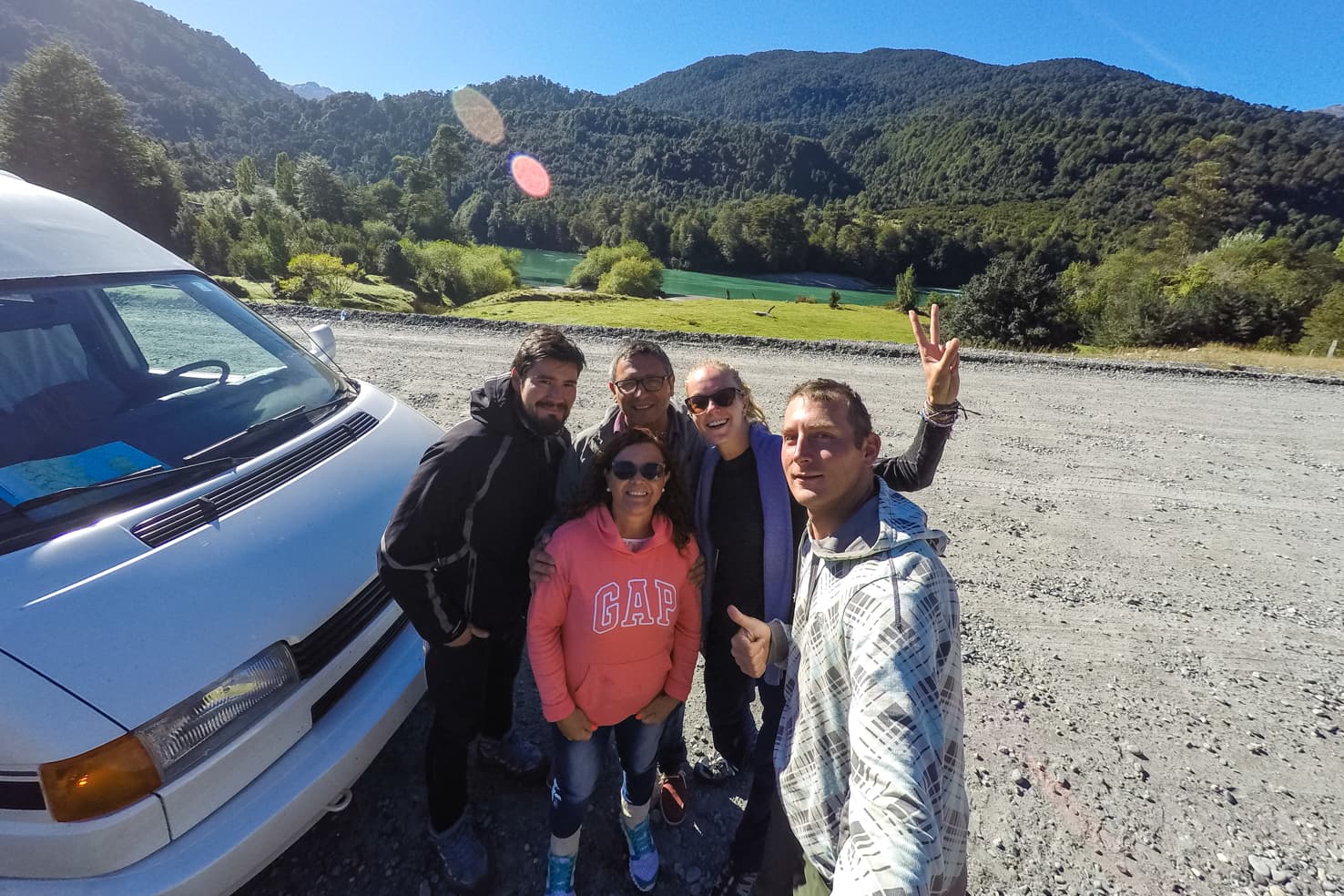 Although the park is small, it hides one of the most stunning wonders of nature I’ve ever seen, the Hanging Glacier. A short hike through the rainforest leads to a lookout where everyone stood in awe. We all watched the enormous glacier creating a tall waterfall and slowly filling up the lake underneath. 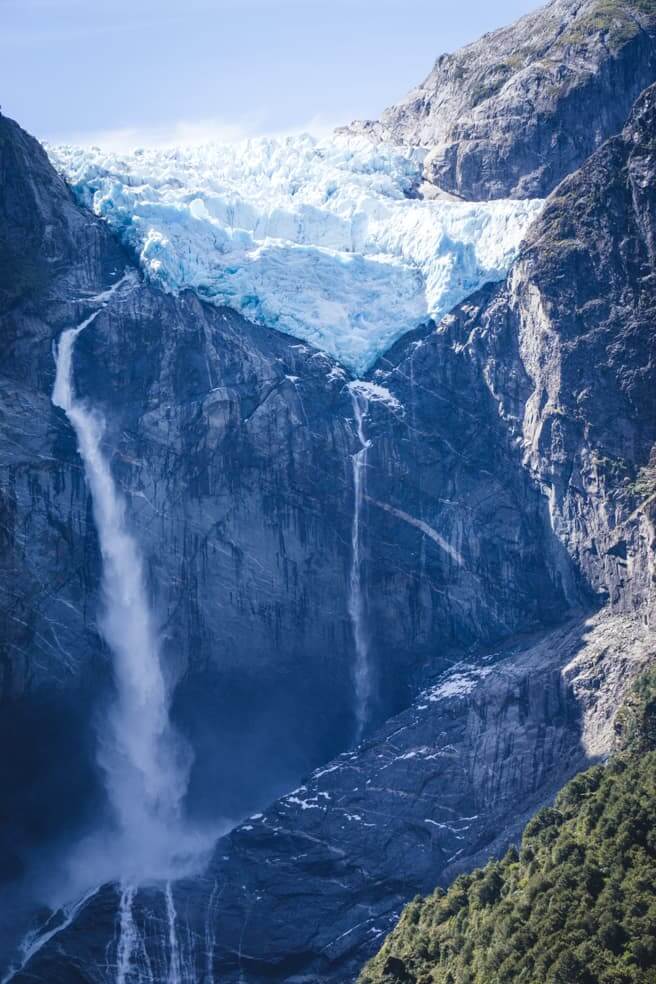 Later in the afternoon, our newfound Chilean friend Matias introduced us to his friends and a typical Chilean drink Pisco. As we found out, Pisco is usually enjoyed as Pisco Sour, mixing it with lemon juice, egg white, and syrup. On the other hand, young Chileans drink it the budget-friendly way, mixing Pisco with Coca Cola and calling it Piscola. 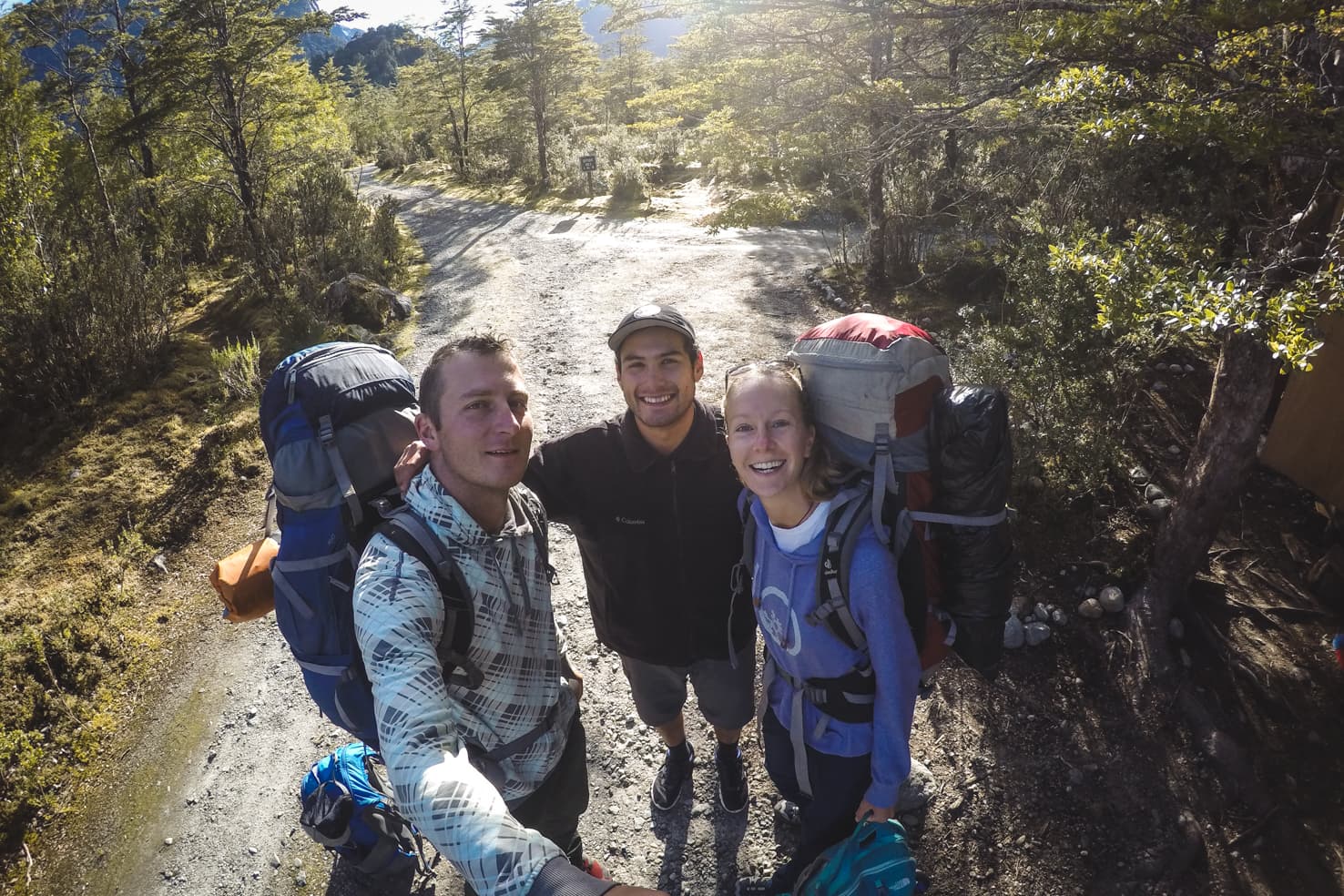 Early in the morning, a loud bang woke us up. It was coming from the glacier. We heard the avalanche far in the distance and the echo it created. We didn’t mind waking up by this powerful sound of nature. 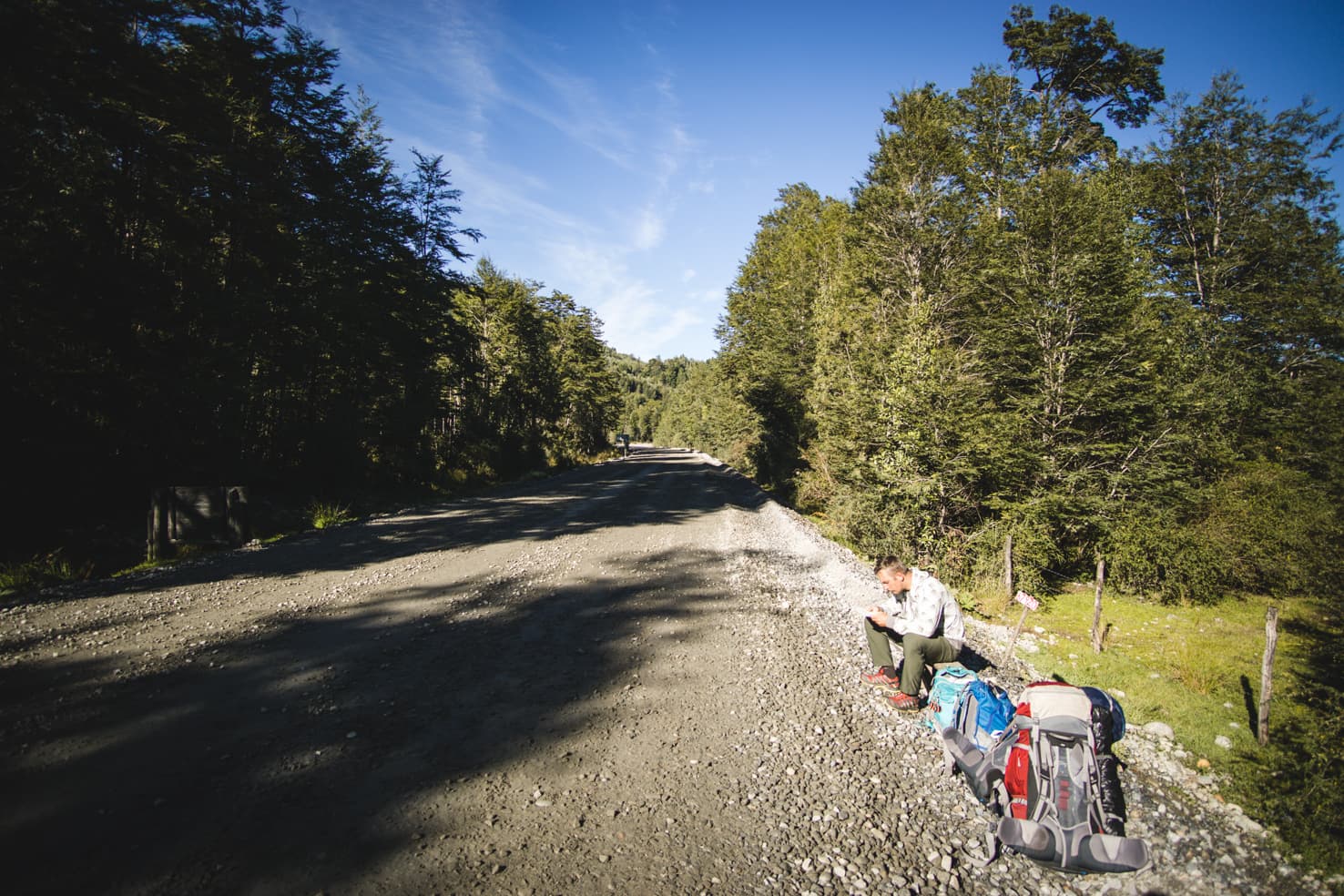 I realized the beauty of travelling in one direction with other travellers. We kept meeting the same people, always greeted each other, exchanging stories from previous stops.

A week later, we were on our way to Villa O’Higgins, a tiny village located what seemed like as far from people and civilization as possible.

The route leading to Villa O’Higgins involved two ferries and a ride on a dusty dirt road with mesmerizing glacier views. I’ve never seen so many glaciers in a span of just a few hours. 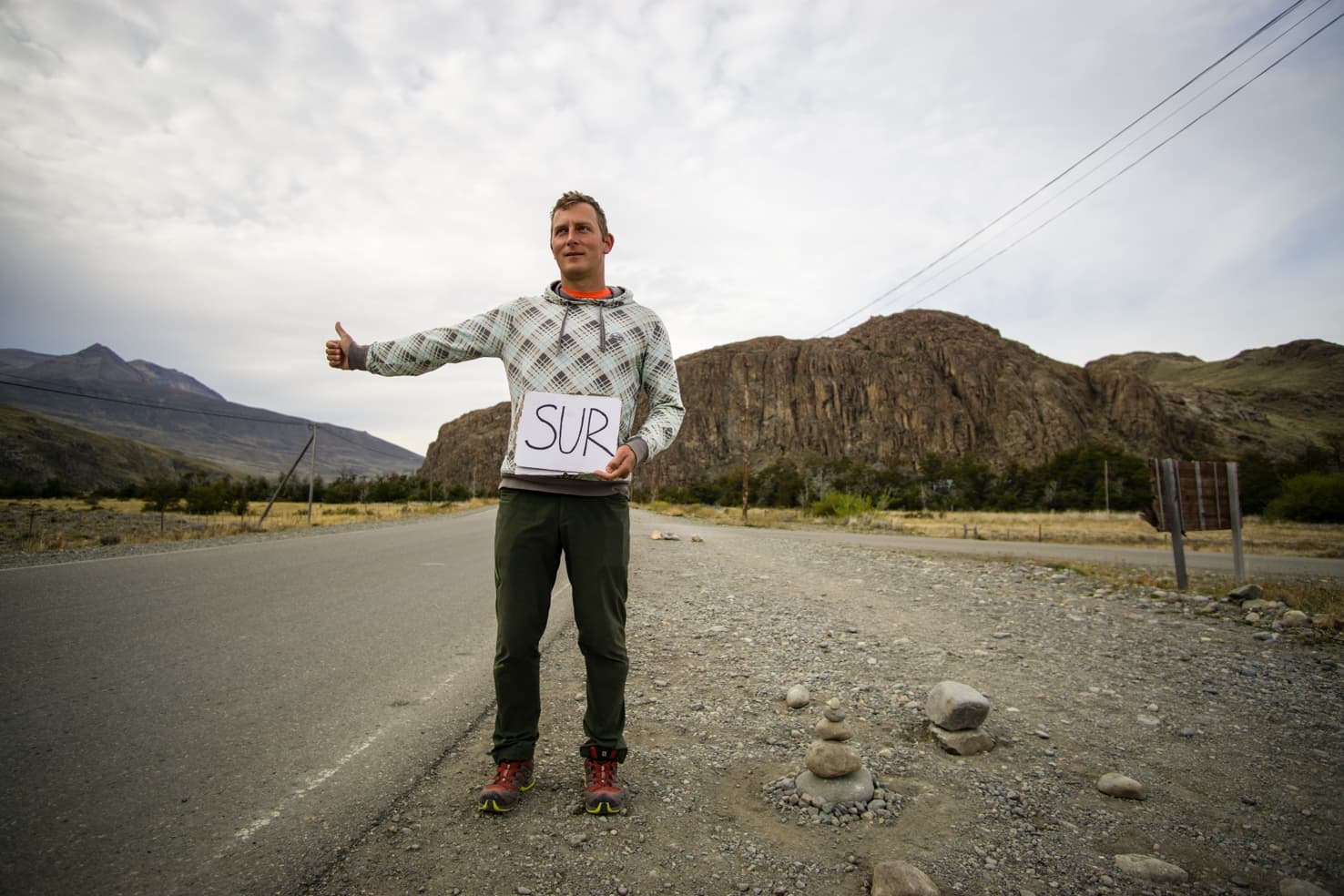 Continuing south, we hitched a ride for the last leg of our journey in the smallest car yet.

With their adorable son Nils, a Dutch couple Michiel and Paula happily squeezed us in for the ride. Or I should say a 2-day ride. Our small backpacks were stuffed behind our headrests while big backpacks were resting on our legs. 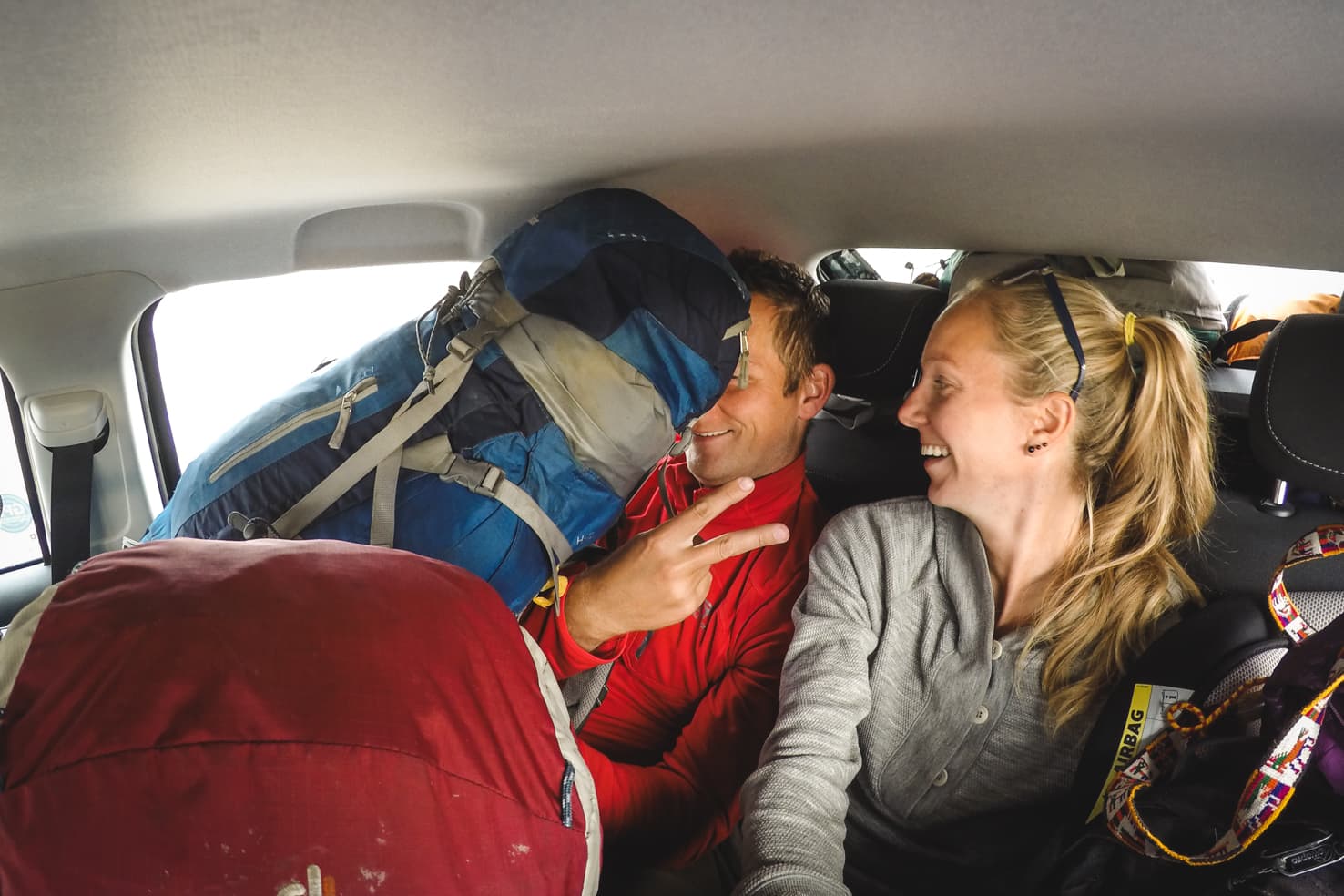 500 km later, we arrived in Puerto Natales in Chile, the end of our hitchhiking adventure.

Three weeks on the road, almost 2,000 km, 12 rides and thanks to the kind people we’ve met, one of the most memorable legs of our backpacking trip around the world have ended.

Our hitchhiking experience taught us to live in the present moment.

Hitchhiking is a mental challenge. It built my confidence, taught me patience and adaptability to different people, culture, and situations.

You know that feeling when you’re trying something new, unsure what’s going to happen but excited to find out? That’s how I felt every single day on our hitchhiking journey. 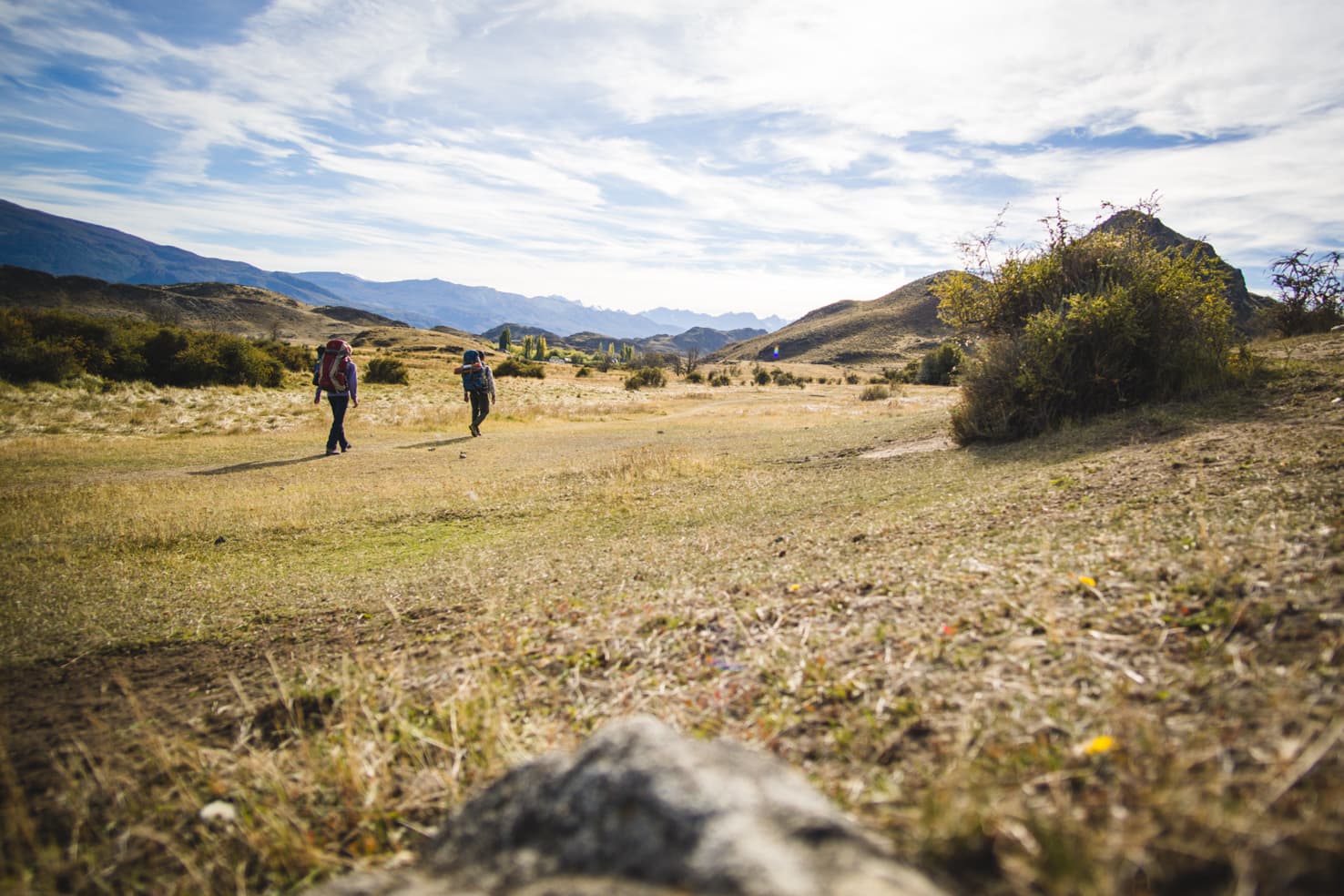 I wasn’t worried about past mishaps or uncertain future.

I was embracing the present and enjoying the immediate situation.

I was living for the present moment, full of excitement with a thumb up on the roadside.

I never knew who we would meet, where we would end up that day and how the day would unfold.

We worked towards our goal step by step, day by day, and accomplished it with far more exciting moments and a wonderful ending that I’ve ever imagined.

I think of this experience often. It provides me with a sense of direction and a constant reminder to be present. And little by little, everything will work out the way it’s supposed to.

Intrigued by Chile or South America? Let us take you on an exciting journey to explore South American adventures from your home. 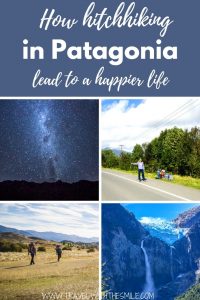 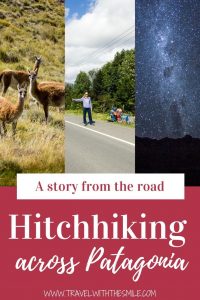