“Haleakala is simultaneously the longest paved continuous climb in the world as well as the shortest ascent from sea level to 10,000 feet in the world. Though not terribly steep, this is a long, grinding climb that will reduce a strong rider to a whimpering lump.” —Velominati

Ok we get it, long and hard climb.

There is only so much time we can spend on the beach doing…nothing. It feels like wasted day.

As for our trip to Maui, the first thing Michal researched were biking trails. We just can’t get used to the very short biking season in Canada. When I heard about biking up a volcano, which is considered the longest paved climb in the world, my feelings were mixed.

It does sound very intriguing, I just wasn’t sure if I felt like biking 53 km up the hill. But then imagine the long downhill…aaaah.

And we would be biking in 28°C on the beautiful island on a VOLCANO. How cool is that? After seeing few pictures of the volcano from the ride of other cyclists, we got pumped and couldn’t wait to get there.

We will be biking up the Haleakala volcano on Maui.

Bike shorts were the first item we packed. Number 1 thing that is absolutely necessary for a long ride, anything else you can rent.

We were watching the weather forecast every day. No rain was the only requirement we had. This part is tricky. Every day is raining on Maui, at least during winter. But not in every part of the island. Even though it can last only few minutes, you can’t afford getting wet when biking to the high altitudes. Temperature drops drastically and getting a cold or something worse is the last thing anyone on a vacation would wish for.

Starting point is a little hippie town Pa’ia, where most bike rentals are situated. We rented road bikes, since we would be biking on the road only. And we knew that adjusting the bike to fit our bodies is the most important thing at this point. We own mountain bikes and usually bike on dirt. Sales associate at the rental store wasn’t very helpful. He was distracted by a hollywood celebrity that came in just few moments after us. I think it was Owen Wilson, but honestly, couldn’t care less if I’m right. The clock was ticking, we had a long ride ahead of us and didn’t have time to start looking for another store. So we stocked up with energy bars and gels while waiting till every guy in the store kissed his ass and joked. Finally one guy saw us waiting impatiently and adjusted our bikes.

First we headed to the beach. Yeah, that’s right. We would be biking to 3055 m above sea level. Just for our fun, we had to take a shot of our feet at sea level. 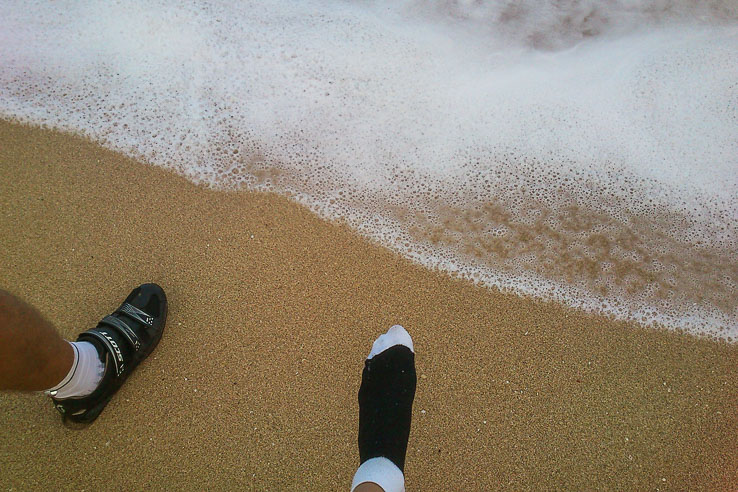 Getting used to the road bike was harder than I thought. Saddle felt very different, handlebars are much narrower and held vertically to the bike, as opposed to holding them horizontally on a mountain bike.

After 10 km, passing an old church, fields of sugar cane, sugar mills and few local boutiques, we reached the town of Makawao. The last stop where you can fill up all the water bottles you have. Next water station is 30 km away, in Haleakala visitor centre. 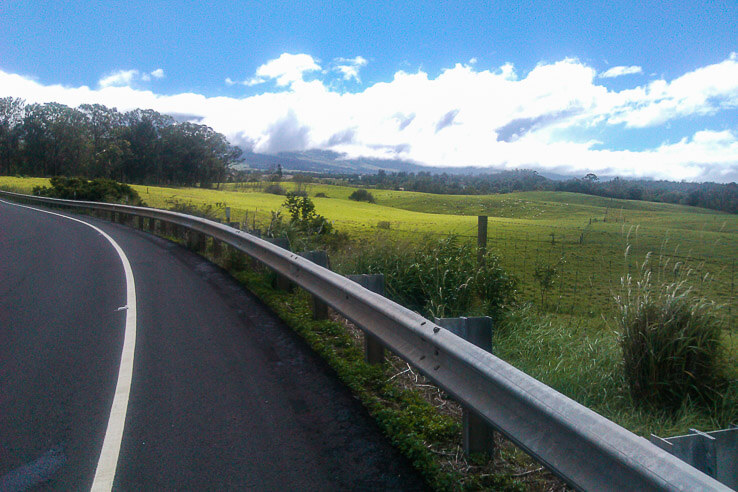 There are so many switchbacks on the way up you wouldn’t believe. Too bad I haven’t had a clue how many, I would know how many I knocked off and could count each time I made a turn as a small victory. 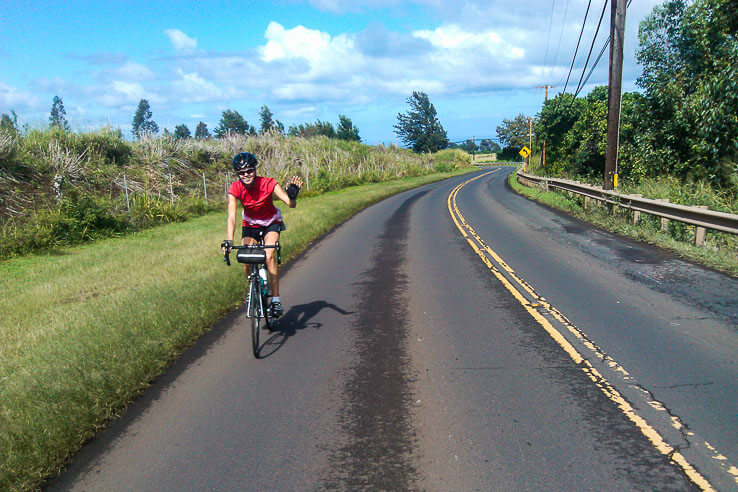 As soon as we turned to Haleakala Highway (the only way up), signs telling us the current altitude were painted on the road. Many of them. But the altitude wasn’t increasing fast enough. Maybe because we were having too many stops. But it was supposed to be a vacation ride, not an ironman paced ride.

We haven’t done a long climb like this before and didn’t know how to spread our energy. Better slow and steady, than fast ending up with cramps. Our motto of the day. 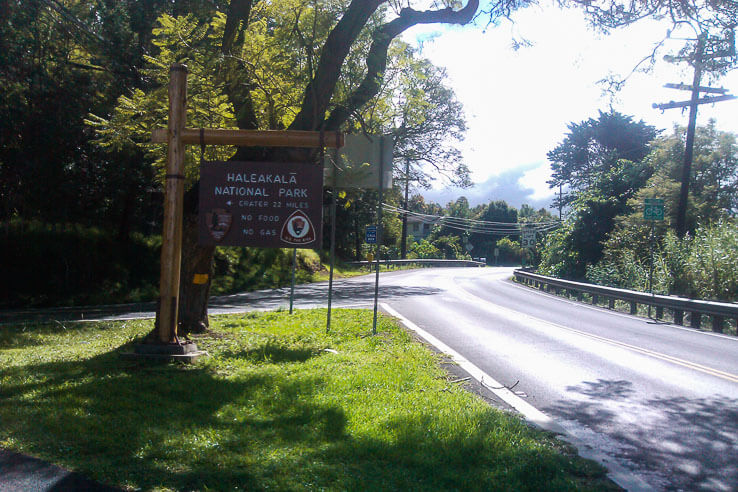 We were using Strava app for recording the ride. According to Strava, there are parts of the road rated as HC climb (in french „Hors category“ means in english „beyond categorization“). Cyclists and spectators of Tour de France are familiar with this term as being incredibly difficult climb. 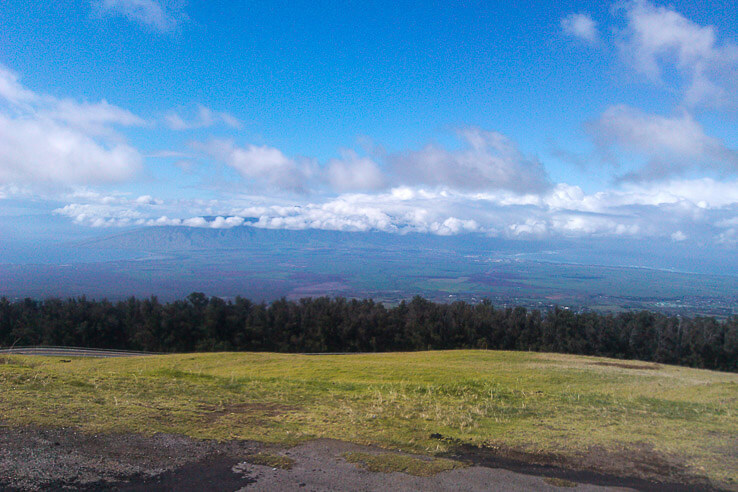 Around 20 km into the climb, my quads started to burn. Dammit, it’s not even half the climb. It has an average ascent of 5,5% and rarely gets above 8%. No part of the climb is very steep, but there is almost no flat or downhill sections. We were biking UP all the time. 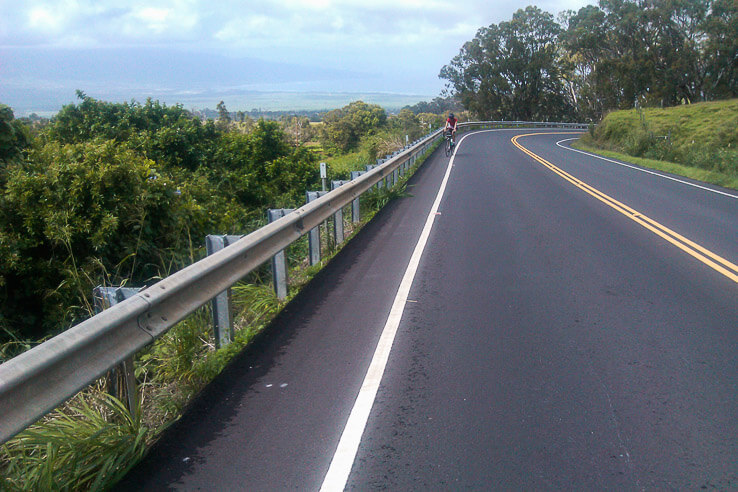 By this time I started to notice even more, that shifting gears on a road bike is different as well. When I’m tired on a mountain bike, I shift down a gear, so I can pedal more easily. Well, gears on a road bike are harder. So the lowest gear was still hard to pedal on.

Thoughts about not conquering the summit already entered my mind. I tried not to focus on it and kept pedaling, slowly leaving behind one switchback after the other. 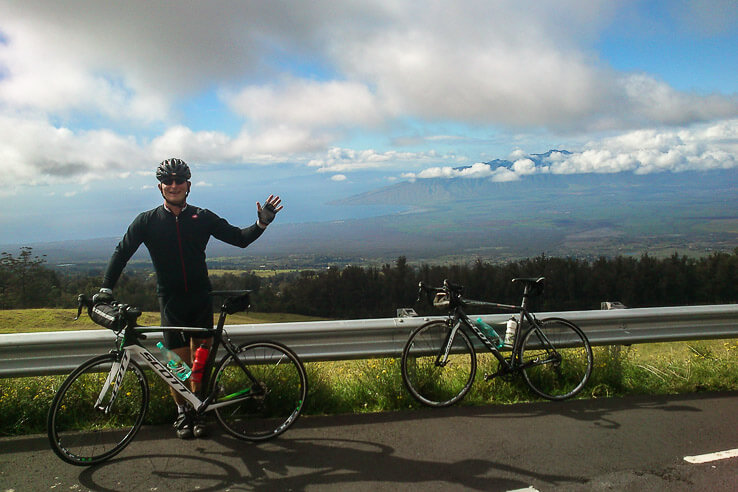 People’s thumbs up sticking out their car’s window were very welcomed encouragement. Slowly the views of the island started to disappear. And we were now biking above the clouds. The feeling of biking so high, above everything else, is indescribable. The summit was getting closer. So as we thought. 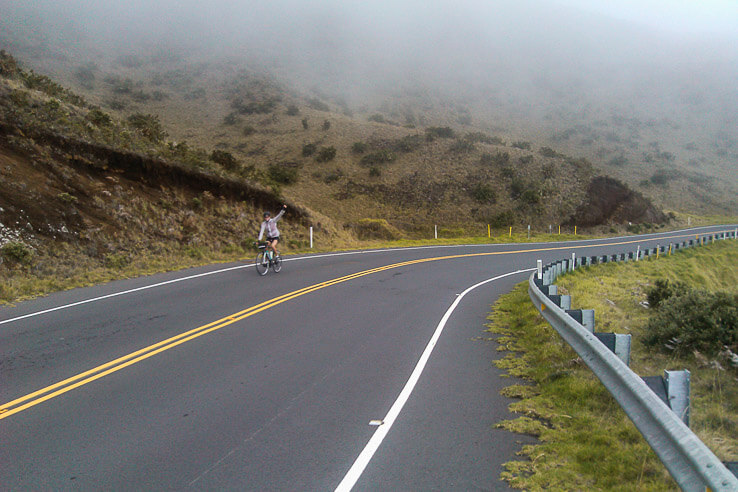 The higher we climbed, the harder it got. Signs of cramps started to emerge in my legs. Winds also kicked up and temperature dropped from 28°C to 13°C. I was also getting low on energy bars. 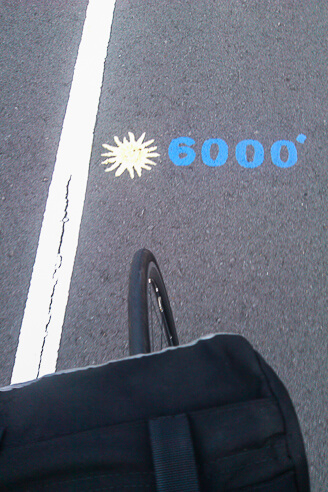 By the time we reached the visitor centre 40 km from the start, we had been in the saddle for almost 6 hours. This would not make me Queen of the Mountain, the title you can gain on Strava app for being the fastest on any particular segment of the climb. 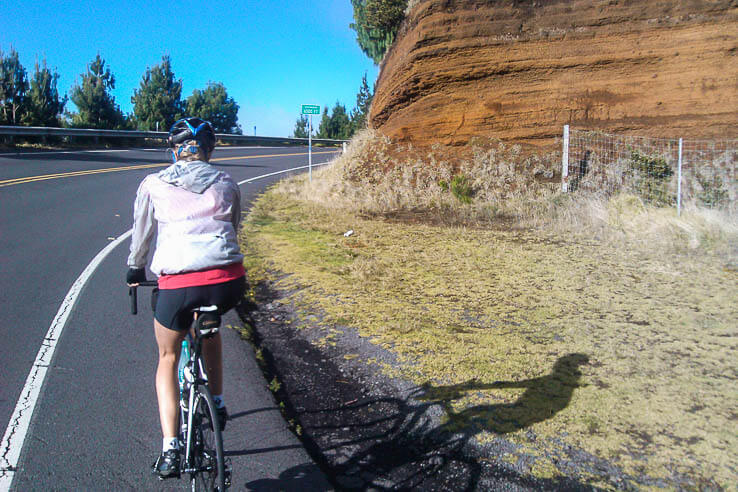 The fatigue kicked in hard and we realized the sun will set in under two hours. That is not enough time to climb to the summit and then downhill all the way back to Pa’ia.

At that moment, we weren’t even sad that we would not reach the top of the volcano. We were so proud of ourselves to make it all the way to the Haleakala visitor centre and were looking forward to well-deserved rest for our legs going down. 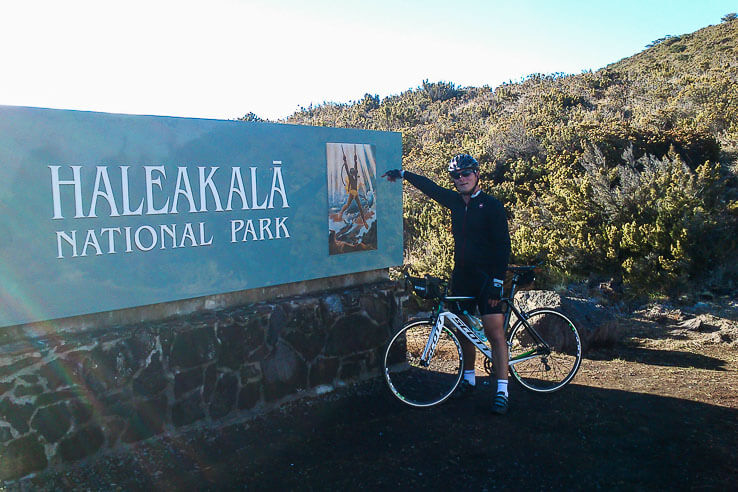 Downhill took about 1,5 hours! No pedaling required. After many hours of pedaling up the endless hill, we were enjoying a ride through the clouds and cutting the switchbacks like pros. Well, almost like pros. 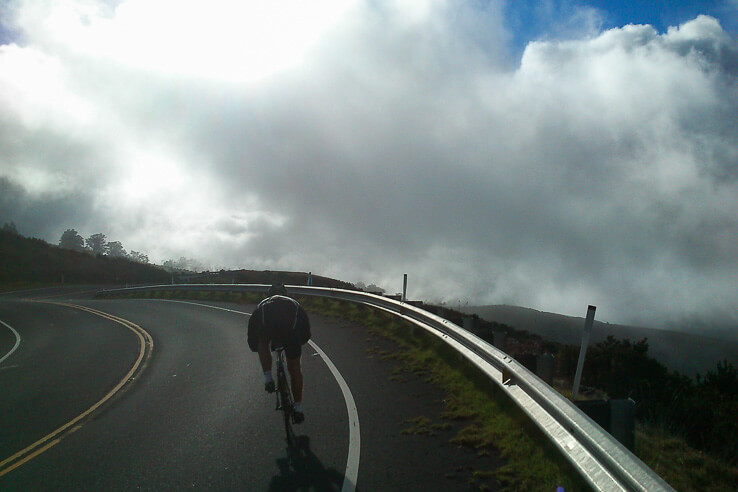 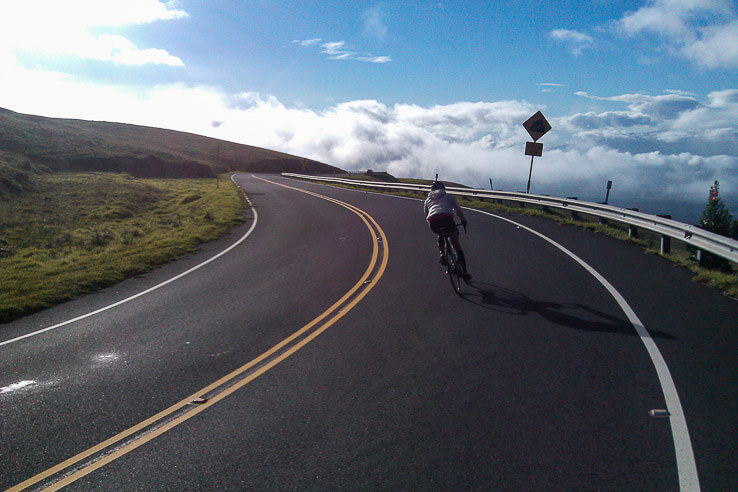 Pa’ia greeted us with warm breeze. As soon as we hit the town and took off all the extra clothes, we found a restaurant and dived in whatever they served first. 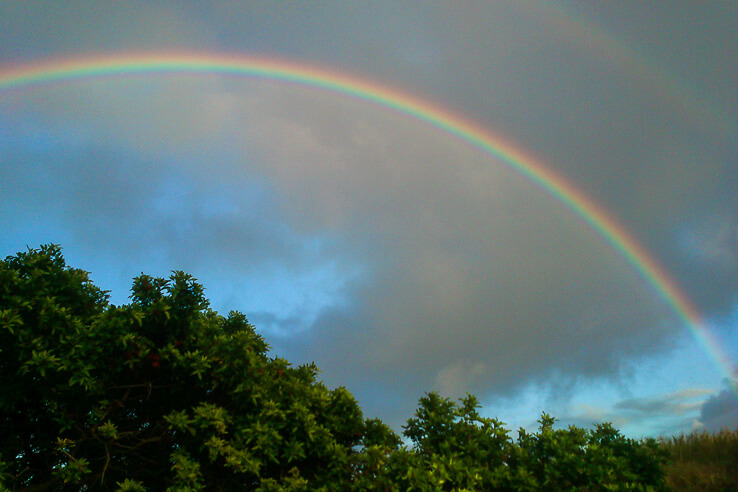 Totally exhausted but happy at the end of the day, we knew this extraordinary adventure will stay in our minds (and legs) forever.

Even before the downhill, we looked up to the summit, only 15 km away and said: „We are coming for you next time. “

We would love to hear from you! When was the last time you pushed beyond YOUR limits? What did you do? Let us know in the comments. 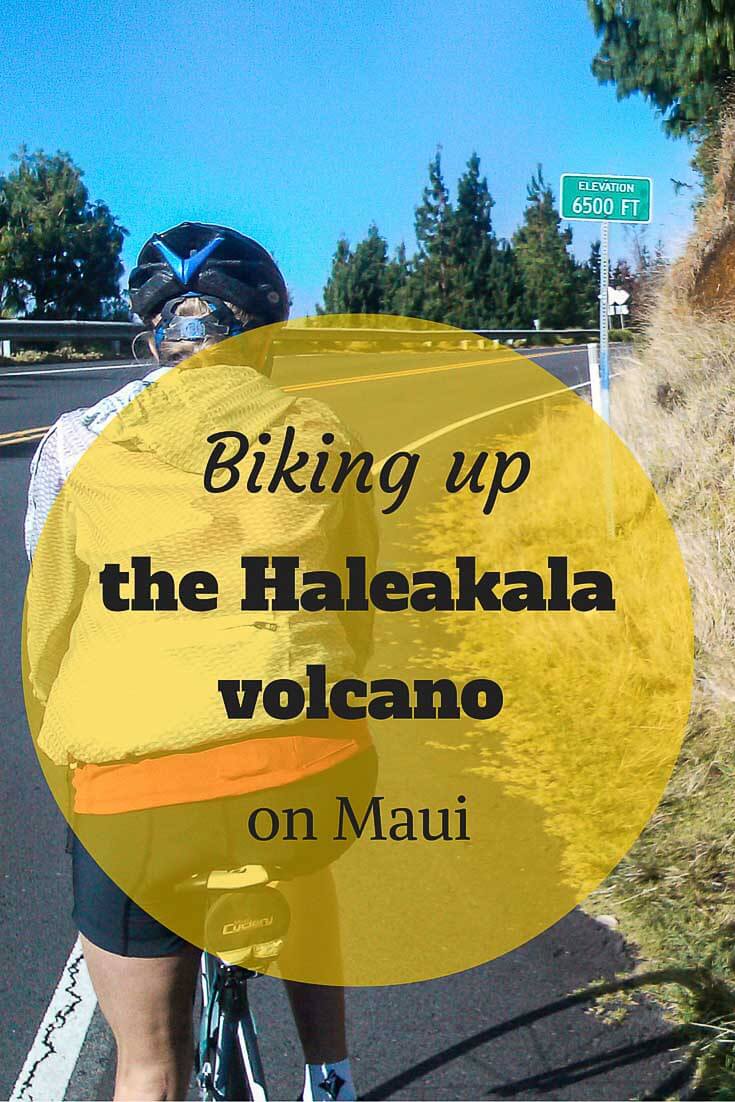