Teotihuacan used to be one of the biggest cities in the world during its era. With a population of more than 125,000, it was the largest city in the Mesoamerica. It is designated UNESCO World Heritage Site.

Pyramids of Teotihuacan are located in the State of Mexico, only 40 km from Mexico City which makes it a great day trip to explore this ancient site. 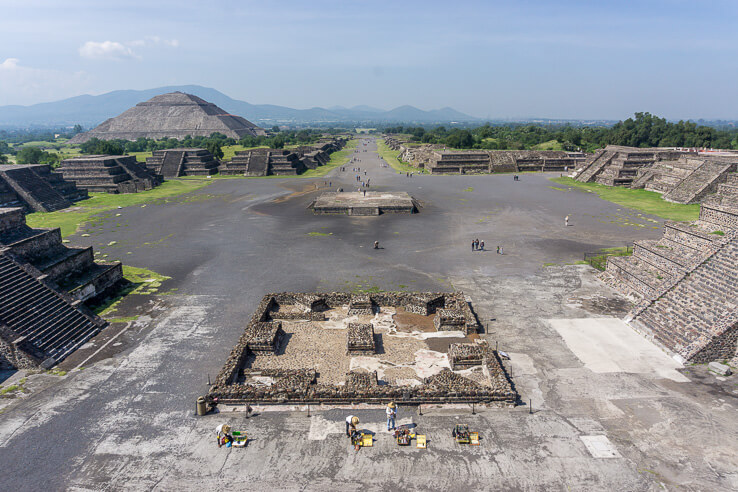 Avenue of the Dead from The pyramid of the Moon, Teotihuacan

Luckily there is no need to book a tour. It can easily be done on your own. Not only it will save you some money, you can do it at your own pace and most importantly arrive before all the buses.

Visit of Mexico City is not complete without visiting the archaeological site of Teotihuacan. 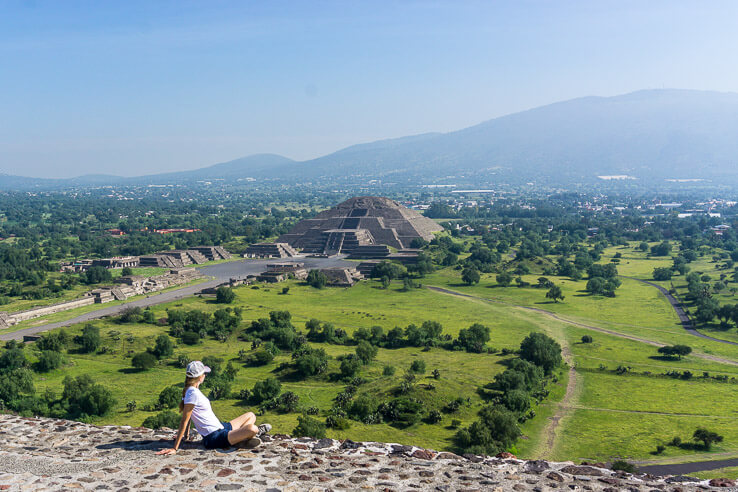 Sitting on top of The pyramid of the Sun, Teotihuacan

How to get to Teotihuacan

Once you are inside the station, head all the way to the left, to gate 8. You’ll find a window with a sign Autobuses Teotihuacan. As of August 2016, round-trip bus ticket cost 92 pesos (5 USD). Staff will point you in the right direction from which your bus departs. Also, the bus driver checks every ticket making sure nobody gets on the wrong bus. It departs every 20 minutes; time of your departure is printed on the ticket. 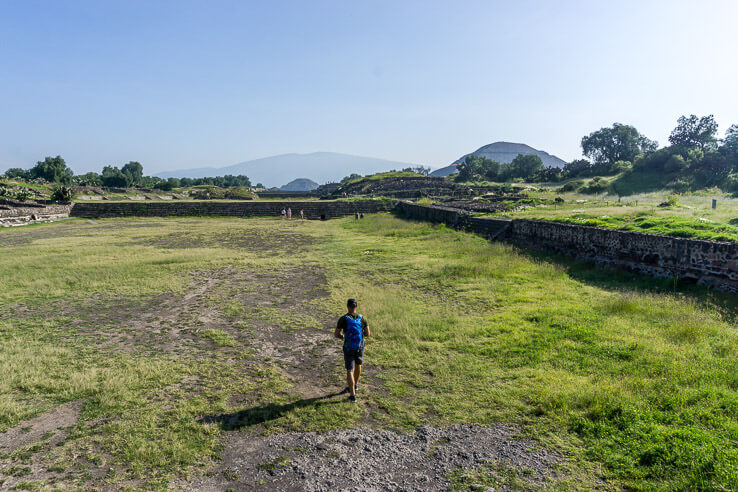 Teotihuacan archaeological site opens at 9 am, so catching the bus at 8 am would be the best option. It takes about an hour to get there. The bus driver will announce the bus stop for the pyramids so you won’t miss it. It stops right in front of the gate to the site where you purchase an entrance ticket to Teotihuacan for 65 pesos (3,50 USD) per person.

The only thing you’ll be missing out doing this on your own is a tour guide. You can hire one at the gate for around 700 pesos (38 USD), depends on how well you can haggle. Or read before you arrive more info about Teotihuacan pyramids. Most of the signs at the site are in Spanish. 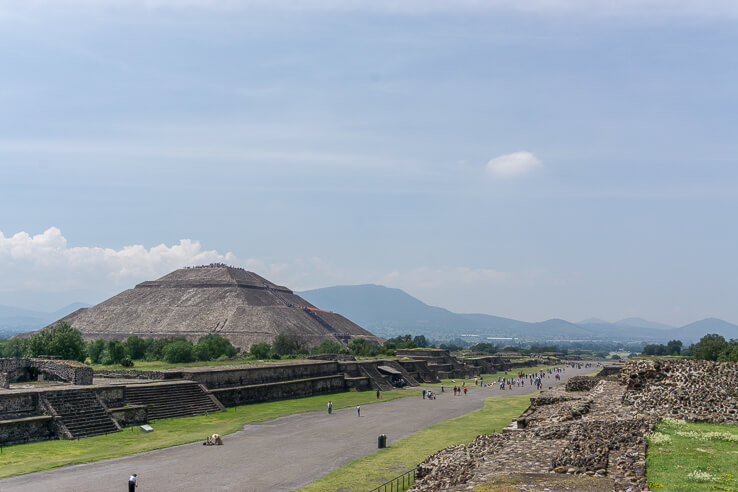 The pyramid of the Sun, Teotihuacan

The sooner you start the better chance of getting there before the crowds you have. Tour buses pull over around 10:30. By that time it starts to get very hot. And climbing to the top of the pyramid would not be very pleasant.

When you get to Teotihuacan

All the structures are along the main street of Teotihuacan – Avenue of the Dead. Biggest are The pyramid of the Sun and The pyramid of the Moon. They are very visible right from the start. That’s where we headed as our first stops. 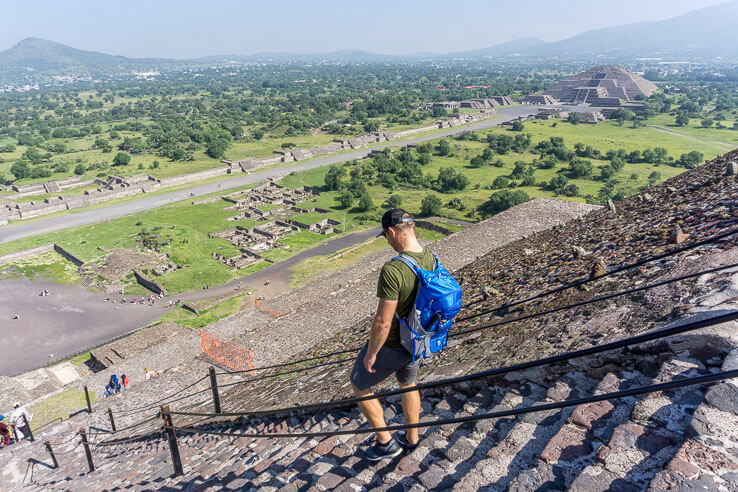 You can climb all the way to the top of The pyramid of the Sun. It’s quite a climb with more than 200 steps. The view from the top is breathtaking. I still can’t wrap my head around the fact that more than 125,000 people lived there. Parts of the surrounding pyramids are still covered in dirt and archaeologists are working on uncovering them.

Second stop was The pyramid of the Moon. You are only allowed to climb to the ¼ of the pyramid which will offer a view of the whole Avenue of the Dead with surrounding temples. 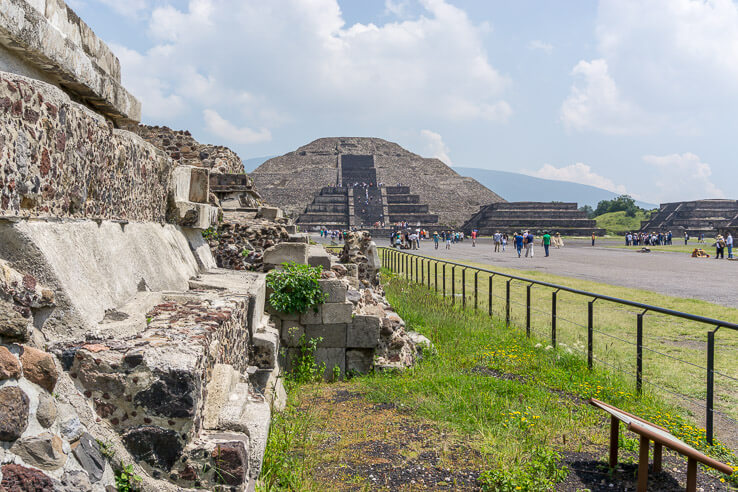 The pyramid of the Moon, Teotihuacan

The Palace of Quetzlpapalotl is the most preserved building in Teotihuacan. Some ornaments were retouched so all the details are visible. People building the city had obviously taken the time to finish them. It took 350 years to build the city of Teotihuacan. 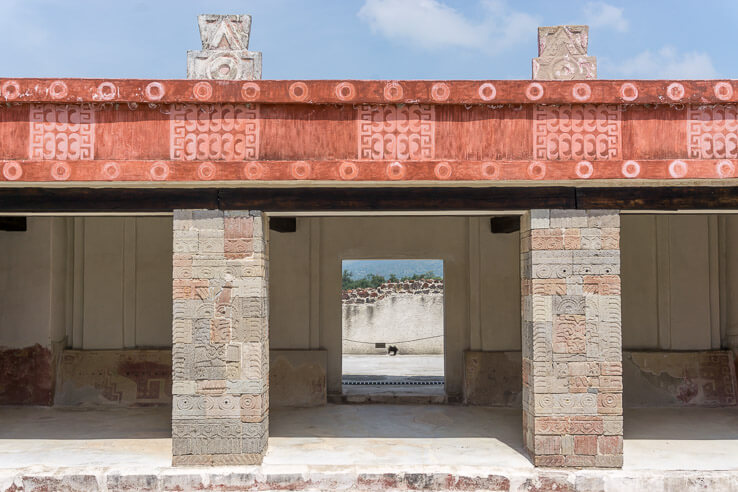 Where to eat in Teotihuacan

Several food stands are located on the site. Another option is restaurants outside the Teotihuacan. You can re-enter the site anytime as long as it’s on the same day. We opted for homemade sandwiches as these places are usually crowded and overpriced.

Teotihuacan closes at 5 pm, but honestly, you don’t need a whole day to walk around the site. In a leisurely pace, we were done in 4 hours.

The bus to the Mexico City will pick you up at the same spot it dropped you off. 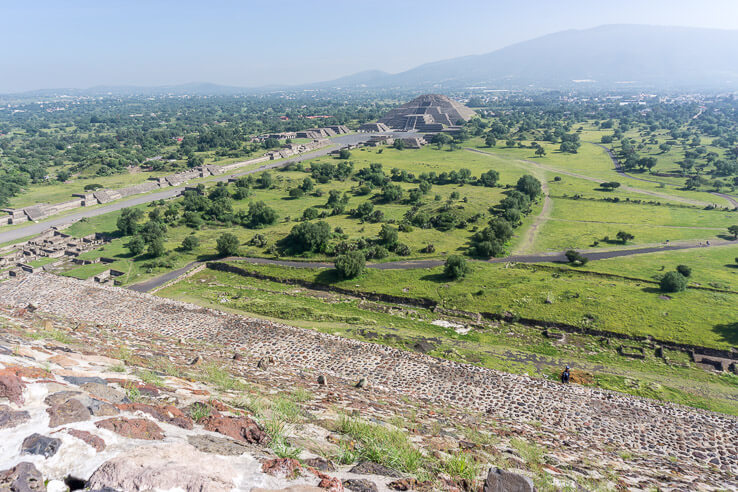 Tips before you go to Teotihuacan 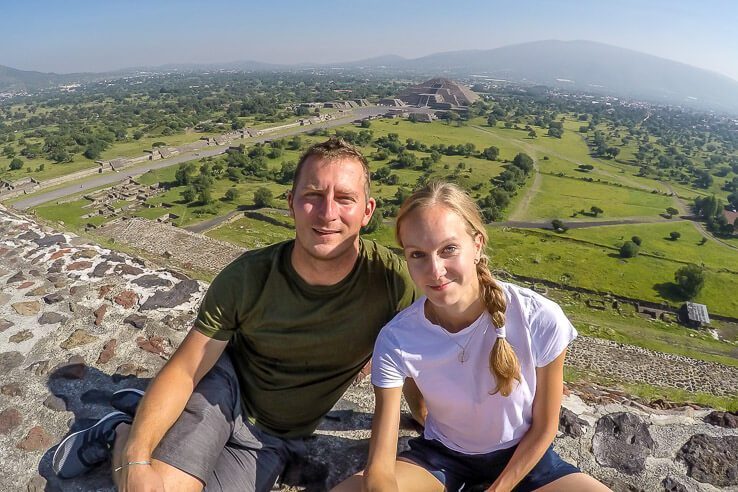 We found the site of Teotihuacan overwhelmingly beautiful and much bigger than expected. Given the size of the pyramids, it really makes you think how they built this city 300 years BC and appreciates all the perks of modern age which were not available for people building it.

When you visit Mexico City, make sure the trip to one of the biggest pyramids in the world is on your list!

Have you visited pyramids in Teotihuacan? Or any pyramids in Americas? Which is your favourite? 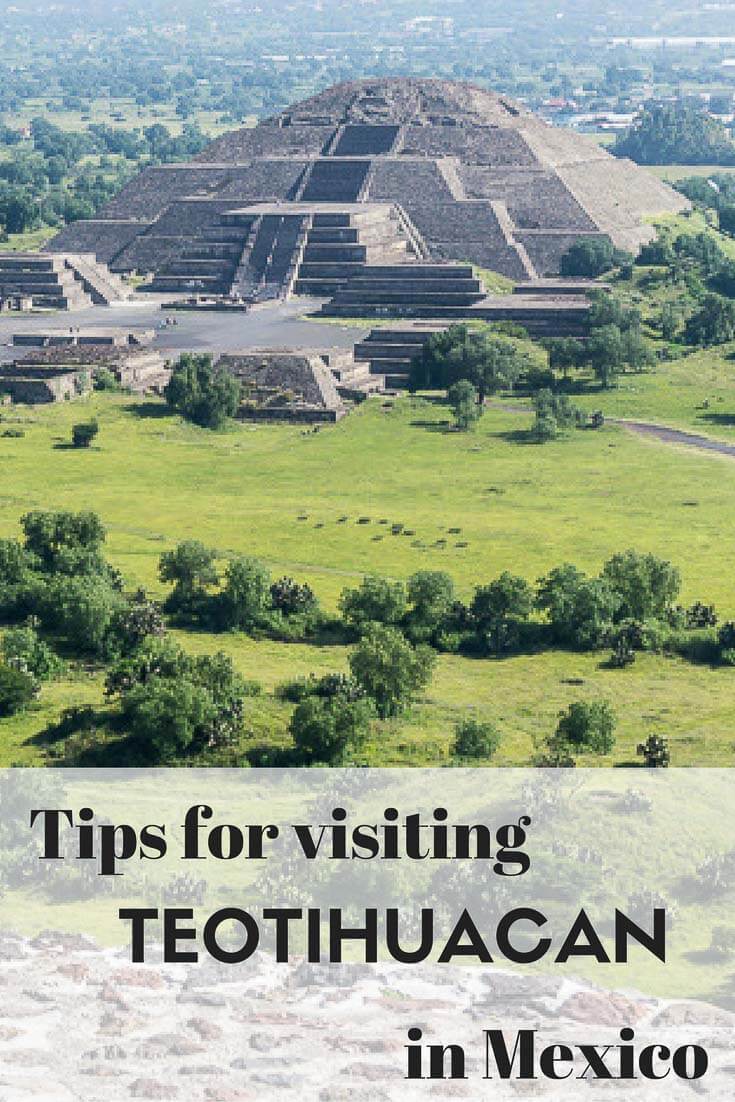 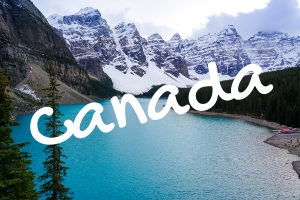 After several years of waiting for good conditions

Same lake, different season. Boom Lake is one of o

Ringing in 2020 on the biggest wild ice rink (more

When the stars align to create the most perfect co

Happy holidays, everyone! May your days be filled

Enjoying a blue bird day in the mountains 💙 Hop

Wildlife watching is my favorite thing in the Rock

So much can happen when you're looking for a perfe

Find your next flight

Any cookies that may not be particularly necessary for the website to function and is used specifically to collect user personal data via analytics, ads, other embedded contents are termed as non-necessary cookies. It is mandatory to procure user consent prior to running these cookies on your website.